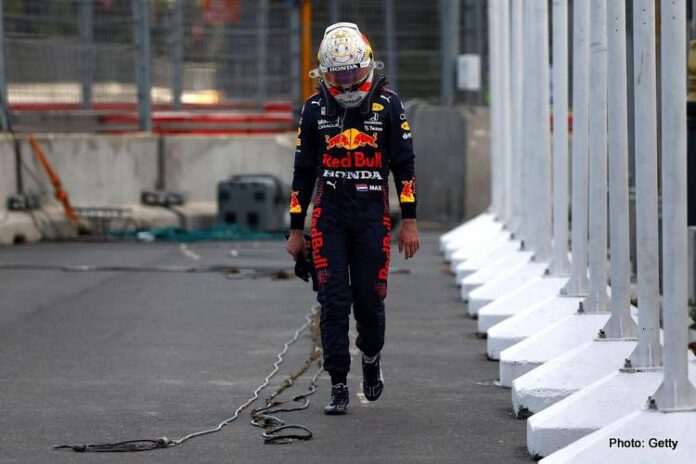 Red Bull driver Max Verstappen was dominating the race at the Azerbaijan Grand Prix before he crashed out due to a blown tyre with just four laps to go.

Luckily, the gods were in his favor after his rival Mercedes driver, Lewis Hamilton made a ghastly mistake and dropped from P2 to the very last place on the grid.

Even though this led to some damage control, Verstappen said that he would have loved to score some points.

Red Bull’s cars are a lot better adapted to street circuits. This was evident in both Monaco and Baku.

It is for this very reason that Verstappen was upset over a ‘missed opportunity’.

“On street circuits we seem to have the upper hand over Mercedes, which is precisely why I would have liked to score more points today,” he said.

Hamilton’s blunder at the restart meant that he too went home with no points.

“Of course it makes a difference, but I would have preferred to run further out of course,” he continued.

However, Verstappen thinks that Red Bull will face a more difficult time on normal circuits.

“I feel bad about the missed opportunity, because over the whole season we need those points,” he said.

After the race, Hamilton made a statement that Verstappen was in the lead only due to a much more superior car.

The Dutchman, however, was quick to respond, saying that he would have said the same thing had he been in the Brit’s place.

“I would say that too if I were him. I think if I’m in his car, I’m still two-tenths faster than him. I don’t care what he says,” he concluded.

“Those are just rumours”: Ferrari boss pleads to no wrongdoing