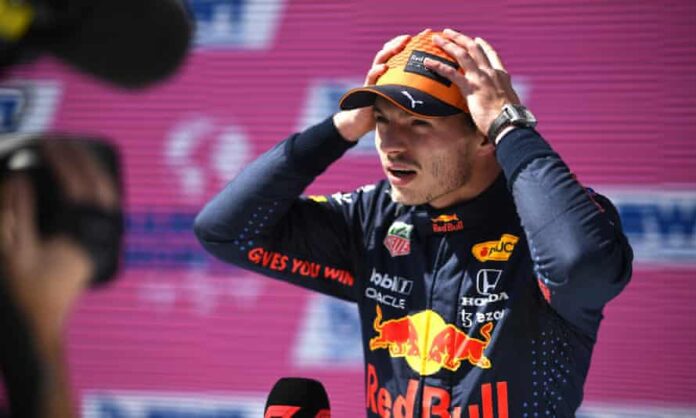 Max Verstappen has taken his fourth pole of the season at the Austrian Grand Prix but was frustrated by the end of qualifying.

Just after he crossed the line to seal his P1 finish, he took to the team radio to criticize his team’s strategy.

“We will never, never, do that again, to go out first. It was P1, but we’ll talk about it later,” he announced on the radio.

This comes after he fought off Lando Norris and beat him by just four hundredths of a second.

The Dutchman was the first driver to leave the pits for his flying run in Q3.

However, he was irate as other drivers were able to enjoy his slipstream giving them an advantage of straight-line speed.

“A lot of things of course can happen in one lap, but I think it’s of course, very satisfying to take another pole position,” he said.

“Of course, I would have liked it to be a different because Q3 was not very good.

“I went out and realized I was first, so you just get on with it, but I didn’t expect to lose so much time on the straights, so that’s what we will know for next time.

“Better to stay in the box than do that,” he added.

Irrespective of the risky strategy, Verstappen was glad to see fans creating an electric atmosphere surrounding the ring with most of them cheering for the Dutchman.

“Personally, I wasn’t happy after Q3 but in general, during the whole day it was very enjoyable to see all the fans and I think even before Q1 started they were just jumping and bouncing around and they were having a good time, especially of course already with the last one and a half years everyone has gone through and to open it up again… and to see all the fans cheering is an amazing sight,” he said.

“Of course it doesn’t matter if they’re orange or not – just in general to see the fans there is amazing – so hopefully we can give them a good race tomorrow.”

“With Max, he’s always looking for that little bit more and I think he felt there was more in the car today,” said Horner.

“He had a slight lock-up in the first run and we wanted to give him clean air for the last run, and that meant he was at the front of the queue.

“And when you’re at the front of the queue you’re creating the hole in the air and that gave Lando just behind him a slight tow.

“That’s what he was a little frustrated about at the end there.

“Nonetheless, a phenomenal performance and to have Checo [Sergio Perez] up there ahead of the Mercedes is a great team result,” concluded Horner.

Sergio Perez starts third on the grid on Sunday and was pleased to have such a strong qualifying, especially after a tough weekend.

“Yes well it’s been a pretty hard weekend up to now, we’ve been chasing a lot the balance, just exploring the car in all areas and chipping away every single run so it didn’t come easy, you know?” he said.

“It was very hard work, harder than you might think, but in the end, we’ve got a good lap and a good starting position for tomorrow because I believe that tomorrow we’ve got a better race car than in quali,” he concluded.

For now, Verstappen has a chance to increase his 18 point lead over Lewis Hamilton.