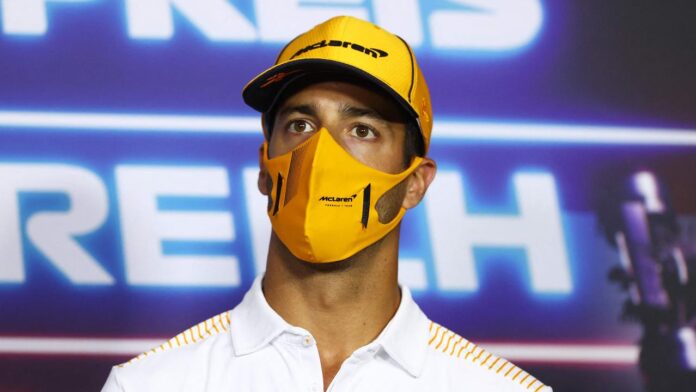 The Austrian Grand Prix was an exciting race that kept fans glued to the edge of their seats.

While Ricciardo had a difficult qualifying session, his drive during the race was incredible.

However, the Australian’s performance has been highly inconsistent and his true potential has not yet been unleashed.

While Ricciardo struggles to find his grip on the car, McLaren team boss Andreas Seidl expresses his disapproval.

“He’s disappointed and so are we. We thought it would be faster,” he said.

Seidl, however, still has hopes from the Australian: “I am still convinced that at some point- it will click for him.”

The biggest problem that Ricciardo faces is that the car has been designed around the Brit. As a result, most of his races have just been trial and error.

Despite this, the Honey Badger has been making small improvements as the races go by.

Ricciardo had to adapt

Back when Ricciardo joined McLaren, fans thought that it would prove to be a tough competition for Norris. Ricciardo had a backlog of 7 GP wins and 31 podiums.

Unfortunately, the numbers are still the same with almost half the season over.

It is difficult to imagine what he must be going through considering his best performance out of nine races has been a P6.

He said: “When I drove the car, I said to myself, ‘OK, it’s a different one’.” It doesn’t end there. He also noted, “I’ve had to adapt a few things with y driving style to help the car. I’m still trying to get on top of that.”

Ricciardo and the MCL35M

When the Australian got his hands on the car, he did not have the opportunity to test out the old-spec McLaren.

It was at the shakedown that he had his first experience with the car. And that offered no learning experience.

Then came pre-season testing which gave him 1.5 days with a car that had a new floor compatible with the new rules and new tyres.

Daniel had to learn everything about the car from scratch while driving it. However, it is only a matter of time before things fall in place for him.

Through his career of 11 years and experience with 5 different teams, he knows he takes time to get used to his new office.

The upcoming British Grand Prix has the team at the edge of their seats but hopeful.