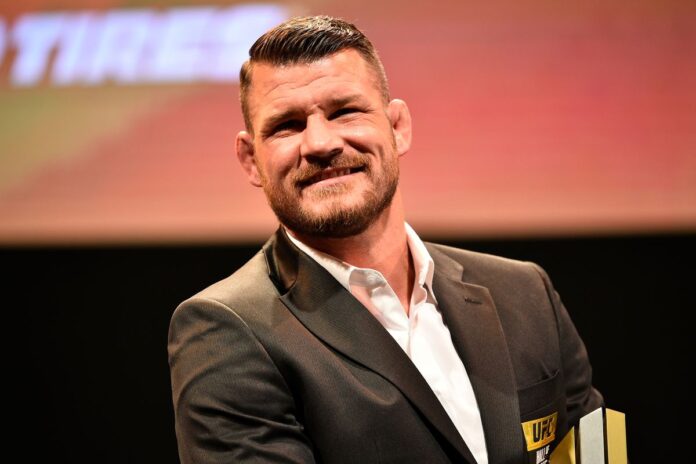 Michael Gavin Joseph Bisping was born on 28 February 1979 (age 42) and is an English sports analyst, actor, commentator, and a retired MMA fighter.

He is known for competing in the Middleweight and Light Heavyweight divisions of the UFC.

Bisping has been a professional competitor since 2004.

He was also the first British fighter to compete in a main event at UFC 78.

Then at UFC 199, he was the first British fighter to win a championship and is also the only British to win a UFC title.

Bisping grew up in Clitheroe, Lancashire after being born on a British military base in Nicosia, Cyprus.

After the German invasion in 1939, his polish grandfather Andrew (Andrzej), fled with his family from Poland to England.

Bisping’s father served in the British army and his mother was Irish.

At the age of eight, Bisping began training in Jujutsu.

In 1994, he competed in Britain’s first “no holds barred” competition as an amateur. This is a precursor to modern MMA and is called Knock Down Sport Budo (KSBO).

However, at the age of 18, Bisping left his martial arts training in order to pursue his ‘real-life’.

In less than a year, on the advice of Allan Clarkin, owner of Black Knights Kickboxing, Bisping began training in boxing, kickboxing, and karate.

In 1998, he took a break from competition but returned to kickboxing to win the Pro British light heavyweight title for the second time.

But after winning his second title, he was forced to abandon his full-time training for a “real job”.

He is known to have worked not only in factories, slaughterhouses, and demolition companies, but also as an upholsterer, postman, tiler, plasterer, and salesman.

Like many fighters, Bisping entered the world of UFC after winning a season of The Ultimate Fighter (TUF).

Even though he had competed at 185 pounds for most of his career, Bisping won the series in the light heavyweight category.

He was coached by Tito Ortiz and Ken Shamrock. As a result, he defeated Josh Haynes via second-round TKO in 2006 to win the show.

This was the first fight under the UFC banner for Bisping and led to a career that lasted more than a decade.

Another highlight of his career was his loss to his longtime rival Dan Henderson at UFC 100 back in 2009.

Henderson, with his amazing grappling skills, dropped one of his signature ‘H-Bombs’ which led to Bisping being knocked out.

Even though he had to endure a few H-Bombs, he was able to outscore Henderson within five rounds and won.

Back in 2009, after his major loss to Henderson, Bisping got back into the ring against Denis Kang, a Canadian known for his striking.

After a grueling first round, Bisping was able to finish Kang in the second round marking his most famous comebacks in his career.

Bisping’s highlight fight was against the greatest fighter in MMA history – Anderson Silva.

He was able to fight off the Spider and even managed to knock him down at one point. Additionally, he also survived a flying knee which could have ended his match.

Regardless, Bisping, after five rounds defeated his opponent and picked up one of the biggest wins of his career.

After 10 years with the UFC, Michael Bisping was called to compete for a middleweight title.

The UFC 199 pay-per-view was supposed to be a fight between Luke Rockhold and Chris Weidman.

However, Weidman suffered an injury that led Bisping to step up in his place.

Leading to the fight, Rockhold made it clear that he was expecting an easy victory against Bisping.

But Bisping shocked the MMA world after planting a combination on Rockhold and dropped him on his rear end.

The following ground-and-pound led Bisping to claim his first and only UFC title win of his career.

Bisping met his wife Rebecca, an Australian, in Manchester. The two of them have three children and the family lives in Orange County, California.

Bisping has been diagnosed with strabismus. This is a condition where the eyes are not properly aligned when looking at an object.

He developed this condition after his fight with Vitor Belfort at UFC on FX: Belfort vs. Bisping in 2013.

Even though Bisping lost this match, the result is considered to be highly controversial.

This was because Belfort was on testosterone replacement therapy.

Later that month, he gained a small role in the 2017 continuation series of the 1990’s television show, Twin Peaks.

He played the role of Roy Shaw in the sports film My Name Is Lenny.

He also has a short cameo in the 2018 film Den of Thieves.

In November 2020, Bisping was given the main role in a boxing movie titled The Journeyman, based on Mark Turley’s book.