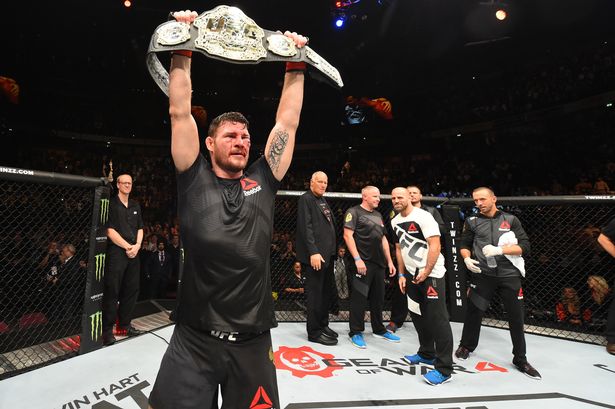 Michael Bisping is a British sports pundit, actor, commentator, and former MMA fighter who participated in the UFC’s Middleweight and Light Heavyweight divisions.

Bisping was born in Nicosia, Cyprus, on a British military installation, and grew up in Clitheroe, Lancashire. He went to Billington’s St Augustine’s Roman Catholic High School. Andrew (Andrzej), his Polish paternal grandpa, escaped with his family from Poland to England after the German invasion in 1939. Bisping’s father, Jan, was a member of the British Army, while his mother is Irish.

He began Jujutsu training at the age of eight. At the age of 15, he fought as an amateur in Knock Down Sport Budo, Britain’s first “no holds barred” competition, a predecessor to modern MMA (KSBO).

Bisping decided to forego his martial arts training at the age of 18 to “pursue real-life”. Less than a year later, on the recommendation of Allan Clarkin, proprietor of Black Knights Kickboxing, Bisping began training in boxing, kickboxing, and karate. Bisping had a brief but successful kickboxing career, winning the North West Area title and then the Pro British light heavyweight title.

Bisping returned to kickboxing after a brief hiatus in 1998 to win the Pro British light heavyweight title for the second time. Soon after winning his second kickboxing title, he was obliged to give up full-time training in order to work a “real job” He worked as an upholsterer, postman, tiler, plasterer, and salesman in addition to factories, slaughterhouses, and demolition firms.

Michael Bisping has competed professionally since 2004 and is a former UFC Middleweight Champion, Cage Rage Light Heavyweight Champion, and The Ultimate Fighter 3 Light Heavyweight tournament winner. He became the first British fighter to compete in a UFC main event at UFC 78. He became the first British fighter to win a UFC Championship at UFC 199, and he is still the only British winner of a UFC title. On July 5, 2019, he was inducted into the UFC Hall of Fame.

On 4 April 2004, Bisping made his professional mixed martial arts debut at Pride & Glory 2: Battle of the Ages, defeating Steve Mathews through 0:38 submission. Only one month later, at UK MMA Challenge 7: Rage & Fury, Bisping scored his first knockout against John Weir. Bisping was slated to face the seasoned Renato Sobral in his third MMA match at Cage Rage 7, but his opponent backed out 10 days before the event.

Instead, Bisping won a technical knockout over Mark Epstein to become the Cage Rage light heavyweight champion. Bisping went on to defend his championship title against Epstein in a rematch at Cage Rage 9 with a knockout victory that cemented Bisping’s place as one of England’s finest light heavyweight competitors. UFC.com dubbed him “The Great British Hope” as a result.

On 30 April 2005, Bisping made his debut for the promotion at Ultimate Force, defeating Dave Radford to capture the vacant Cage Warriors light heavyweight title.

Bisping appeared as a contestant training under Tito Ortiz in the UFC’s The Ultimate Fighter 3 reality television series in early 2006. He won a preliminary fight by TKO over Kristian Rothaermel, then a semi-final fight via submission over Ross Pointon after landing a flying knee and a succession of strikes. Bisping defeated Josh Haynes in the finals by TKO at 4:14 of the second round, giving him the second Light Heavyweight winner of The Ultimate Fighter television series.

Bisping was set to meet Eric Schafer in The Ultimate Fighter 4 conclusion five months after his victory in the TUF 3 finals, however, he withdrew due to visa issues. The fight was rescheduled and held on December 30 at UFC 66. Bisping defeated Schafer via TKO in the first round at 4:24.

Bisping made his middleweight debut against Charles McCarthy on April 19, 2008, at UFC 83. McCarthy was unable to continue after the first round due to a forearm injury acquired after receiving an unanswered succession of knees and uppercuts from Bisping. Bisping won via TKO.

On November 14, 2009, Bisping met Spirit MC and PRIDE veteran Denis Kang at UFC 105. Bisping won via TKO in the second round. The match was named Fight of the Night, earning Kang and Bisping a $40,000 prize.

On October 16, 2010, at UFC 120, Bisping faced and defeated Yoshihiro Akiyama, winning 30–27 on all three judges’ scorecards. Despite being rocked early in the fight by Akiyama, Bisping regained his cool and landed combinations on Akiyama repeatedly to sweep all three judges scorecards. The fight was named Fight of the Night.

Bisping was scheduled to face Demian Maia at UFC on Fox 2 on January 28, 2012. However, due to an injury, Mark Muoz was forced to withdraw from his fight with Chael Sonnen on the same evening, and Bisping instead faced Sonnen for a chance to challenge Anderson Silva for the Middleweight title. Sonnen won a unanimous decision over Bisping.

In Manchester, Bisping met his Australian wife, Rebecca. The couple lives in Orange County, California, with their three children. Callum, their eldest son, is a talented wrestler who was a CIF champion as a high schooler and now competes in NCAA Division II at San Francisco State University. Their third kid was born right before Bisping left for the United States to prepare for his fight against Dan Miller.

Bisping has strabismus, a disorder in which the eyes are not correctly aligned when gazing at something. This was due to a detached retina injury sustained during Bisping’s fight with Vitor Belfort at UFC on FX: Belfort vs. Bisping in 2013, which Bisping lost via technical knockout in round two.

Because Belfort was taking testosterone replacement treatment at the time, the loss was deemed contentious. Bisping expressed his happiness after Belfort was knocked out by Lyoto Machida with a front kick at UFC 224 on May 12, 2018.

Read more: Michael Bisping net worth: How much does the MMA fighter earn and what is he worth in 2021?