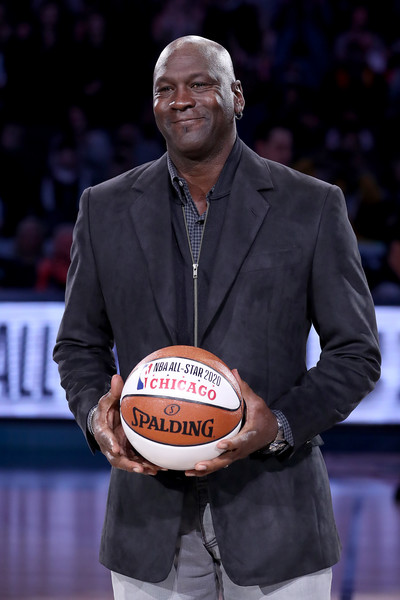 Michael Jordan is a businessman and former professional basketball player from the United States.

Jordan graduated from Emsley A. Laney High School in Wilmington, where he excelled in basketball, baseball, and football. During his sophomore year, he tried out for the varsity basketball team, but at 5’11” (1.80 m), he was deemed too short to play at that level.

He grew four inches (10 cm) and trained hard the following summer. Jordan averaged more than 25 points per game (ppg) over his final two seasons of high school play after earning a spot on the varsity roster.

He played in the NBA for 15 years, winning six championships with the Chicago Bulls. In the 1980s and 1990s, he was instrumental in popularizing the NBA around the world, becoming a global cultural icon in the process.

Jordan joined the Bulls as the third overall draught pick in 1984 and quickly became a league star, entertaining crowds with his prolific scoring while establishing himself as one of the game’s best defensive players.

His leaping ability, as evidenced by slam dunks from the free-throw line in Slam Dunk Contests, earned him the nicknames “Air Jordan” and “His Airness.” Jordan won his first NBA championship with the Bulls in 1991, and then added titles in 1992 and 1993 to complete a “three-peat.”

In September 1989, Jordan married Juanita Vanoy. They had two sons named Jeffrey and Marcus, as well as a daughter named Jasmine. The Jordans filed for divorce on January 4, 2002, citing irreconcilable differences, but later reconciled. They filed for divorce again, and on December 29, 2006, they were granted a final decree of dissolution of marriage.

Jordan proposed to his long-term girlfriend, Cuban-American model Yvette Prieto, on Christmas Eve 2011, and they married on April 27, 2013, at Bethesda-by-the-Sea Episcopal Church. On November 30, 2013, the couple announced that they were expecting their first child together. Prieto gave birth to identical twin daughters named Victoria and Ysabel on February 11, 2014.

Jordan became a grandfather in 2019 when his daughter Jasmine gave birth to a son, the father of whom is NBA player Rakeem Christmas.

Jordan is one of the most commercialised athletes in history. He has served as a spokesperson for a variety of companies, including Nike, Coca-Cola, Chevrolet, Gatorade, McDonald’s, Ball Park Franks, Rayovac, Wheaties, Hanes, MCI, and Gatorade.

Jordan’s signature shoe, the Air Jordan, was designed by Nike in 1984. Nike later spun off the Jordan line into its own division known as the “Jordan Brand.” As endorsers, the company has a long list of athletes and celebrities. The brand has also supported college athletic programmes at North Carolina, California, Georgetown, and Marquette.

Jordan has also been linked to the Looney Tunes cartoon characters. Jordan and Bugs Bunny played basketball in a Nike commercial that aired during Super Bowl XXVI in 1992.

Jordan became the first NBA player to become a billionaire in June 2014, when he increased his ownership stake in the Charlotte Hornets from 80 percent to 89.5 percent. Jordan was named the Charlotte Business Journal’s 2014 Business Person of the Year on January 20, 2015. In 2017, he became a minority owner of the Major League Baseball team Miami Marlins.

Jordan’s 2015 income from Jordan Brand and endorsements was estimated to be $110 million, the highest of any retired athlete.

Jordan is a co-owner of the Jordan Automotive Group. The company owns a Nissan dealership in Durham, North Carolina, which it acquired in 1990, and it previously owned a Lincoln-Mercury dealership in the same city from 1995 until its closure in June 2009. In addition, the company owned a Nissan franchise in Glen Burnie, Maryland.

Jordan also has a business interest in the restaurant industry. Among his restaurants is a steakhouse in New York City’s Grand Central Terminal. Jordan is the majority owner of Grove XXIII, a golf course currently under construction in Hobe Sound, Florida.

Jordan joined DraftKings as an investor and advisor in September 2020.

Jordan donated $2 million to relief efforts in 2018 after Hurricane Florence devastated parts of North Carolina, including his former hometown of Wilmington. He contributed $1 million to the Bahamas’ recovery efforts following Hurricane Dorian in 2019.

Jordan and his brand announced in a joint statement on June 5, 2020, in the aftermath of the protests following the murder of George Floyd, that they would donate $100 million over the next ten years to organisations dedicated to “ensuring racial equality, social justice, and greater access to education.”