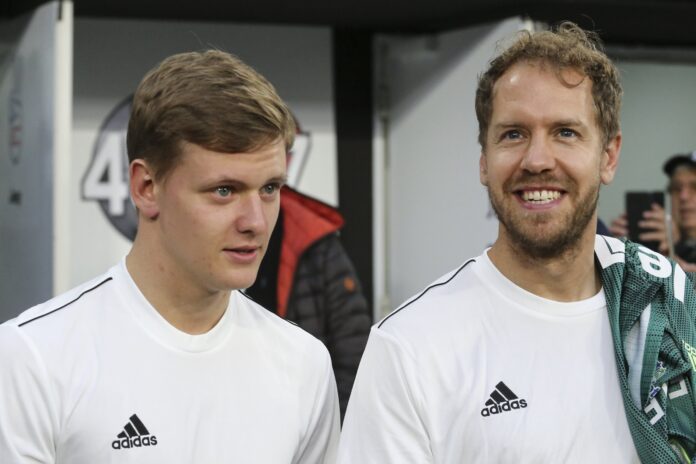 Sebastian Vettel and Mick Schumacher have a friendship unlike any other drivers on the grid (Lando Norris and Carlos Sainz come in a close second).

Vettel has taken Schumacher under his mentorship ever since the latter joined Formula 1 and the student-teacher dynamic was clearly visible after the French Grand Prix.

After the race, the two drivers shared fist bumps with each other and then engaged in a conversation.

Soon, Mick took Vettel towards his car and the two began to discuss something unheard. Vettel took interest and started pointing towards various parts of the car.

Everything is visible on Mick’s onboard camera as he removes the headrest and explains something about the car.

Vettel is known for analysing other cars

Vettel is not new when it comes to inspecting the cars of other drivers.

Considering his experience and skills, he must have provided Mick with some valuable information.

Unfortunately, the Haas F1 car needs it as it is the slowest on the grid.

All about Vettel and Schumacher’s bromance

Formula 1 drivers are usually outright cold with each other as they are continuously fighting for each other’s spots on the grid.

As a result, it is rare to see friendship similar to that of Vettel and Schumacher. And the reason for that is heartwarming.

Mick is the son of Formula 1 legend Michael Schumacher who Vettel grew up idolising. Vettel also had the privilege of sharing the grid with him from 2010 to 2012.

Michael took Vettel under his wing and helped him out on several occasions. As a result, Vettel is doing the same for Mick.