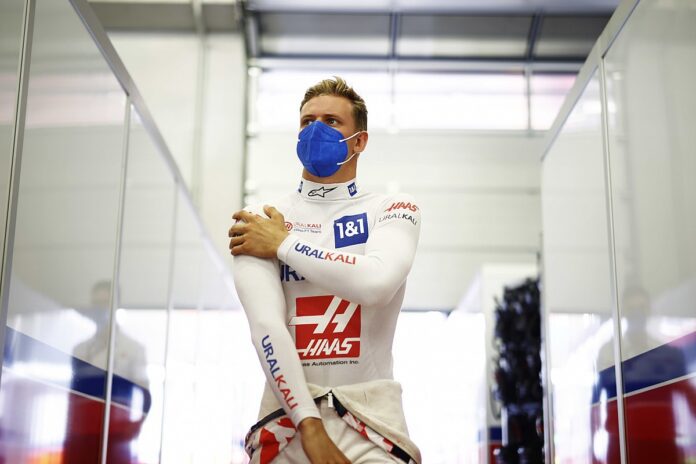 Haas driver Mick Schumacher did not deny the possibility of moving to Alfa Romeo in 2022, but is focused on his current drive for now.

The German has managed to impress all on the grid with his performance despite driving a backmarker car.

Additionally, he has performed better than his teammate Nikita Mazepin with whom he has had several battles.

The young rookie is also a member of the Ferrari Driver Academy.

Alfa Romeo is a customer of the Scuderia which increases the possibility of him moving to drive one of their cars in the future.

Kimi Raikkonen and Antonio Giovinazzi’s contracts with the outfit will end in 2022.

This leaves a seat empty for the German driver.

But for now, he is focused on his tenure with Haas.

What did Schumacher say?

“I am living in the here and now,” Schumacher told Sky Germany while talking about the rumors of him moving to Alfa Romeo.

“I haven’t thought much about next year. We’ll see what happens in the end. I’m sure you’ll hear if something happens.”

Robert Kubica and Callum Ilott – reserve drivers for Alfa Romeo have participated in FP1 and tyre tests with the outfit.

Therefore, we can only wait for a decision to be taken on the two seats with the team.

Former Ferrari driver Gerhard Berger has words of praise for the German driver claiming that he is a typical ‘Schumacher’.

“He delivers exactly what you can expect from him under the circumstances – he beats his team-mate, drives clean races, makes few mistakes,” he said.

“You can also see how he can read and analyze races. He’s a typical Schumacher. You can see he learns quickly and that he soaks up everything.

“Even if Haas is not a top team, after just a few races he has clearly shown he is number one at Haas. That’s a success. That’s why I believe in his future,” he concluded.

Will Schumacher join Alfa Romeo in the future? Only time will tell.

Read More: Toto Wolff had to drop out of race to become F1 CEO due to Ferrari – “They wouldn’t have accepted”