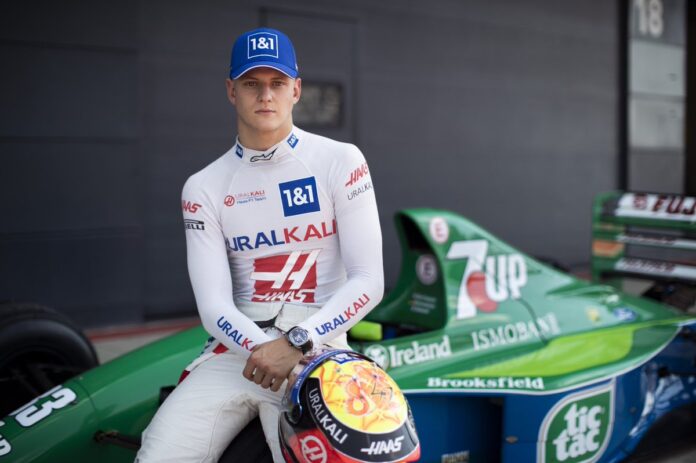 With Mick Schumacher slowly getting more acknowledged with F1, he has been getting opportunities to drive his father’s old cars.

For instance, in 2020, Mick drove Michael Schumacher’s Ferrari F2004 around Mugello. This car has won a championship.

The latest name in the list was Michael’s first-ever car – the vibrant Green-coloured Jordan 191.

Mick and Karun drive the car

Mick and former F1 driver, Karun Chandhok, expressed thoughts of the seven-time world champion through the car that won him his debut.

The Sky Sports F1 presenter, in a tweet, mentioned how it would be an honorable experience to drive this particular car.

“Today is going to be a great day! One of the most beautiful cars of all time. Michael Schumacher’s first-ever F1 car. #Jordan191,” he wrote.

“Wonderful and emotional day sharing the gorgeous Jordan 191 with Mick Schumacher, 30 years after his father made his debut in it!” he added.

Next month, Sky Sports will be telecasting the Jordan challenger in action during a special coverage at the Belgian Grand Prix.

Back in 1991, Michael Schumacher entered the world of Formula 1 through the Jordan 191, designed by Gary Anderson.

However, the German took part in only one race weekend through the entire season.

He got a chance at the Belgian Grand Prix after Jordan had to switch drivers as Bertrand Gachot was sentenced to prison.

Schumacher took over the seat and qualified P7, out-qualifying his teammate Andrea de Cesaris, who ended up in P11; a joint-best ever starting position for Jordan.

During the race, however, he barely made it past the Eau Rouge after his clutch failed to lead to an anti-climactic end to his debut.

Read More: Christian Horner proud of Verstappen – “He held on to it until the end”

Lewis Hamilton looking forward to new tenure with Mercedes – “What...