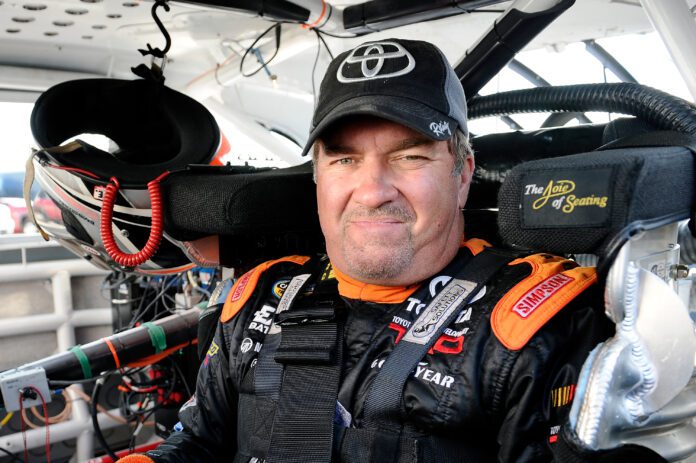 Michael Skinner was born on 28 June 1957 in Susanville, California. Skinner began racing in a Plymouth Road Runner at Susanville Speedway in the 1970s and went on to win three championships at various California dirt tracks. He quickly relocated to North Carolina, where he worked as a crew member for Rusty Wallace and Petty Enterprises.

He made his NASCAR debut in the Winston Cup Series in 1986, driving the No. 19 Pontiac for the Zanworth Racing Team, finishing 22nd in three starts. He made his Busch Series debut the following year at Darlington Raceway, finishing 27th in the No. 0 Hunt Tire-sponsored Oldsmobile.

Skinner’s racing career began in 1975 when he obtained a wrecked Plymouth Road Racer from an insurance firm and converted it into a racecar.

Sinner won three dirt track championships in the late 1970s while working as a good driller during the day and worked on his racecars at night, competing at Susanville Speedway and other dirt tracks throughout his native state of California.

He travelled to North Carolina in 1983 to pursue his dream of becoming a professional racing driver, but he had to first work his way up the ranks.

Skinner, who won roughly half of his late-model entries, linked up with Gene Petty, who asked him to compete for the late model championship at Caraway Speedway in 1994. They went on to win not only the championship but also several late model races across the Carolinas.

His success on the track eventually drew the notice of Richard Childress, who hired Skinner as his driver for the NASCAR Camping World Truck Series’ first season in 1995. Skinner won the series’ first race and went on to lead the No. 3 Goodwrench Truck to 16 victories, numerous pole positions, and the first championship until a full-time Cup ride with Richard Childress Racing became available in 1997.

Skinner teamed up with Toyota in 2004 to return to his favourite series, the NASCAR Truck Series. The pair went on to win more races and earn pole positions until his retirement from the sport.

Skinner was born as Michael Quick, according to a SiriusXM NASCAR Radio interview with Dave Moody. Mike’s mother divorced his birth father when he was eight years old and married a rancher named William “Bill” Skinner, and he adopted his name after him.

In seventh grade, he was elected class president. In his late teens, he moved to Colorado and worked on oil derricks as a manager. After having his license suspended in Colorado, he returned to California and went to the DMV to have it reinstated before purchasing a 1971 Plymouth Road Runner.

After smashing the car while street racing, he repurchased it and modified it into a stock car, nearly winning his first race only to showboat and crash the car, rolling numerous times and landing on his roof.

Skinner was unharmed until he kicked the automobile, breaking his lead toe.

Skinner was married twice, the first time to his high school sweetheart, who he married as an ultimatum but later divorced. Then, in 2000, to the presenter Angie Skinner, who is also a SiriusXM Speedway co-host on occasion.

Mike and Angie Skinner present the “Skinner Roundup” on SiriusXM from time to time. Typically on a Sunday morning following a Cup tournament.

Mike has two boys from a previous marriage, Jamie and Dustin, both of whom have raced in NASCAR.

Skinner is currently The Grand Tour’s “tame racing driver,” racing automobiles around what has been termed “the ebola track.”

Since Jeremy Clarkson, Richard Hammond, and James May left BBC’s Top Gear, fans have been waiting for them to return on their new show The Grand Tour.