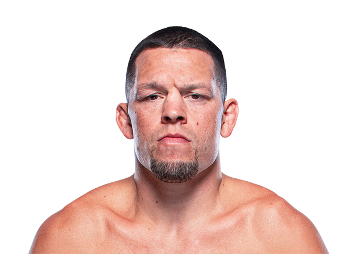 Nate Diaz is a professional MMA fighter from the United States who is currently signed with the Ultimate Fighting Championship.

Nathan Donald Diaz was born and raised in Stockton, California to a Mexican-American family. He went to Tokay High School and began martial arts training with his brother, Nick when he was 11 years old.

Nate began his career with WEC World Extreme Cagefighting. He has also participated in Strikeforce and Pancrase. Since winning The Ultimate Fighter 5, he has been a member of the UFC.

Diaz is tied for the second most UFC bonus awards (15) with Joe Lauzon. Nate Diaz and Conor McGregor held the record for the highest UFC pay-per-view buy rate for their fight at UFC 202 until it was broken by the buy rate at UFC 229.

He fought for the WEC Lightweight Championship against then-champion Hermes França at WEC 24 in 2006, losing by submission in the second round. This was the WEC’s final event before being purchased by Zuffa, LLC, the UFC’s parent company at the time.

Diaz competed on The Ultimate Fighter 5, which featured only lightweights, and fought for Jens Pulver’s team. Diaz defeated Rob Emerson by submission in the preliminary round; in the quarterfinals, he defeated fellow Team Pulver teammate Corey Hill via triangle choke submission in the first round.

Diaz defeated Donald Cerrone by unanimous decision (30–27, 30–27, and 29–28) at UFC 141 in a fight that earned both fighters Fight of the Night honours. Despite being knocked off his feet multiple times by Cerrone’s sweeping leg kicks, Diaz had one of his best performances of his career. Diaz set a CompuStrike record by landing 82 percent of the strikes he threw on his way to victory over Cerrone.

Diaz fought Jim Miller at UFC on Fox 3 on May 5, 2012. Diaz outboxed Miller for most of the first two rounds, even dropping him with a straight left at the end of the first. Miller attempted a takedown near the end of round two, which Diaz stuffed and countered with a rolling guillotine choke, forcing the tap at 4:09 of the second round.

Diaz received his fifth Submission of the Night bonus award for this submission. Miller was also knocked out for the first time in his MMA career.

Nate Diaz and fellow UFC fighter TJ Grant were both removed from the UFC’s lightweight rankings on May 5, 2014, after the UFC deemed them inactive. Diaz returned to the sport after a self-imposed hiatus of more than a year, facing Rafael Dos Anjos on December 13, 2014 at UFC on Fox 13. Diaz failed to make weight, weighing in at 160.6 pounds.

He was given more time to reach the lightweight limit, and he was cut down to 155.2 pounds. Nonetheless, he was fined 20% of his purse, which went to Rafael dos Anjos. Diaz, who appeared unmotivated and annoyed for the majority of the fight, was defeated by unanimous decision (30–26, 30–26, and 30–27).

Diaz was scheduled to face Conor McGregor at UFC 196 on March 5, 2016, after Rafael dos Anjos had to back out owing to an injury. Due to the short notice, the fight was held at welterweight (170 pounds) due to a lack of time to cut weight. Diaz won the fight via second-round submission.

With this, Diaz had nine submission victories in the UFC, which tied him for second all-time behind only Royce Gracie. Both fighters received Fight of the Night honours, and Diaz received the Performance of the Night bonus.

A rematch with McGregor was scheduled for UFC 200 on July 9, 2016. However, the UFC announced on April 19 that McGregor had been removed from the event due to failing to fulfil media obligations in Las Vegas related to the fight. As a result, the fight with McGregor was rescheduled for the following month, at UFC 202, at welterweight. Diaz was defeated by a majority decision in the rematch. The fight earned Fight of the Night honours.

Nate Diaz made his return to the octagon on August 17th, at UFC 241. In the co-main event, he faced Anthony Pettis in a welterweight fight. He won the fight by unanimous decision thanks to a dominant performance.

Diaz fought Jorge Masvidal in the main event of UFC 244 on November 2, 2019. In an unusual turn of events, UFC President Dana White confirmed that the main event would be for a celebratory “baddest m****f***er” (‘BMF’) belt.

Masvidal won the fight by technical knockout via doctor stoppage between rounds three and four, after the cage-side physician determined that a cut over Diaz’s right eye rendered him unable to fight.

Diaz was scheduled to face Leon Edwards in a co-headliner at UFC 262 on May 15, 2021, marking the first time a non-main event and non-title bout had been scheduled for 5 rounds. However, due to Diaz’s minor injury, the fight was moved to UFC 263 and ended up lasting five rounds as well.

Diaz severely injured Edwards. However, Edwards withstood the onslaught and won the fight by unanimous decision.

Diaz’s brother, Nick Diaz, is also a professional MMA fighter who competes for the UFC. Both Diaz brothers are cannabis advocates, and own a licensed line of marijuana pre-rolls manufactured in California Finest. They currently run Nick Diaz Academy, a Brazilian jiu-jitsu school in Stockton, California, and founded the CBD company Game Up Nutrition.

He has been primarily vegan since the age of 18. Diaz’s girlfriend gave birth to their daughter on June 20, 2018.