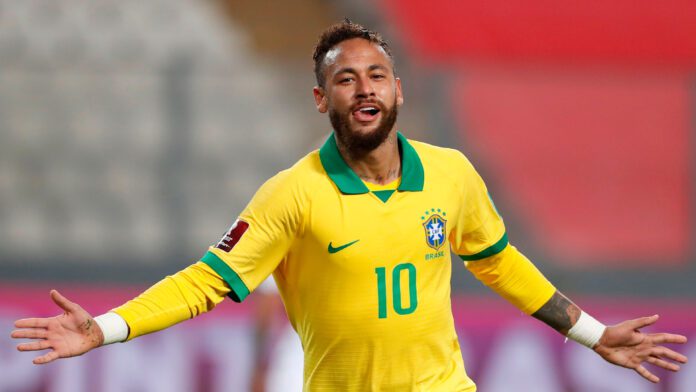 Neymar is a Brazilian professional footballer who plays forward for Ligue 1 club Paris Saint-Germain as well as the Brazil national team. He is highly considered as one of the world’s top players.

Neymar da Silva Santos Junior was born to Neymar Santos Sr. and Nadine da Silva in Mogi das Cruzes, So Paulo. He got his name from his father, a professional footballer who became his son’s counsellor as Neymar’s talent grew. Neymar discusses his father’s role: “My father has always been at my side since I was a child. He looks after my finances and my family.”

Neymar grew up playing futsal as well as street football. Futsal, according to Neymar, had a huge influence on him as a child, helping him develop his technique, speed of mind, and ability to complete plays in tight areas.

Neymar relocated to So Vicente with his family in 2003, where he began playing for the youth side Portuguesa Santista. Later that year, they relocated to Santos, where Neymar joined Santos FC. With the success of his young career and additional wealth, the family purchased their first home, a house near Santos’ home stadium, Vila Belmiro.

Neymar made his professional debut on March 7, 2009, when he was just 17 years old. He was on the field for the final 30 minutes of Santos’ game against Oeste. He scored 14 goals in 48 games during his debut season. Neymar continued his outstanding play in his second season, scoring 42 goals in 60 games and winning the South American Footballer of the Year award in 2012. On May 26, 2013, he completed his final season with Santos and confirmed the next day that he had signed with Barcelona FC.

Neymar accomplished a great deal while playing with Barcelona. Notably, he was a member of the famed attacking three of him, Lionel Messi, and Luis Suárez, popularly known as “MSN,” which finished the 2014-2015 season with 122 goals between them—the most ever scored in a season by an attacking trio in Spanish football history.

The next year, they broke their previous record with 131 goals. On August 3, 2017, Barcelona confirmed that Neymar’s legal representatives had paid the club €222 million, triggering the release clause in his contract. This was the most costly transfer ever made at the time. Neymar then joined the French club Paris Saint-Germain.

Neymar’s professional football career includes numerous important successes as a member of the Brazilian National Team, in addition to playing for various teams in Brazil and Europe. He was chosen to play for Brazil’s senior team for the first time in 2010, when he was only 18 years old, and made his debut in a friendly against the United States.

Following are some of the insane records that Neymar Jr. holds:

Neymar and former girlfriend Carolina Dantas have a kid, Davi Lucca, who was born on August 13, 2011. He has an extremely tight sibling bond with his sister Rafaella Beckran, which he sealed by tattooing her face on his arm, while Beckran tattooed her brother’s eyes on her arm.

Neymar is a Christian who practises the Pentecostal branch of the faith. “Life only makes sense when our highest ideal is to serve Christ!” said Neymar of his faith. He has also been seen wearing a headband with the words “100 percent Jesus” on it. Neymar is said to tithe (10%) of his earnings to his church and to have chosen Kaká as his religious role model.

Every year, Neymar organises a charity match in Jundia, Brazil, with fellow Brazilian footballer Nenê, with the goal of raising food for poor families. Neymar is fluent in Spanish as well as his native Portuguese.

Due to a lack of evidence, authorities confirmed in July 2019 that a rape investigation against Neymar would be abandoned.

Neymar, along with PSG teammates ngel Di Mara and Leandro Paredes, tested positive with COVID-19 on September 2, 2020. According to the French sports weekly L’Équipe, the three players went on holiday to Ibiza. As a result, they were confined for one week, and the rest of the players and staff were scheduled to take a coronavirus test the following week.

During a match between Paris Saint-Germain and Marseille, Neymar claimed that lvaro González racially abused him after being sent off for punching him in the back of the head. In the aftermath, Neymar retaliated on social media, claiming that he did not make any racist remarks during the game.

On September 16, Neymar was given a two-match ban for his behaviour, and LaLiga launched an investigation into lvaro’s alleged racist remarks. Several days before the French league’s ruling, Spanish radio station Cadena SER claimed to have video of Neymar racially assaulting OM player Hiroki Sakai.

On September 30, LaLiga concluded that both lvaro and Neymar would not face sanctions since evidence of their wrongdoings was insufficient. Furthermore, Sakai refuted on social media the day after the verdict that Neymar had made racial remarks at him.

Read more: Neymar net worth: How much does the Brazilian footballer earn and where does he spend it?