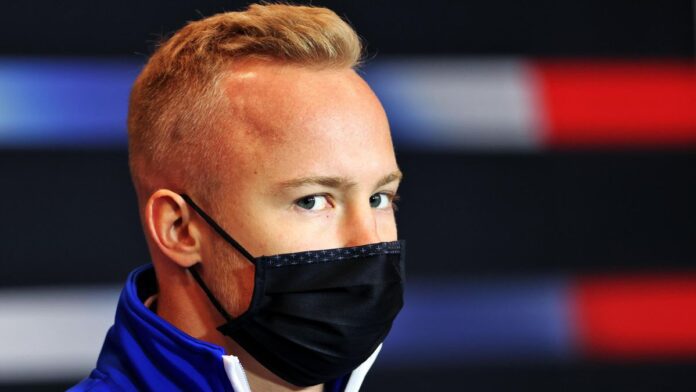 Haas has been deemed the weakest team on the grid this season, especially after having scored no points till now.

The team has constantly been sitting at the bottom of the pack in the constructor’s standings.

Just like the team’s woes regarding their performance, their driver Nikita Mazepin seems to already be frustrated about his rookie career.

Mazepin has seen so many blue flags that he has become tired of seeing them.

“We went on a different strategy- two stops, but that didn’t work. The tire degradation wasn’t even as big as expected, but it was just those blue flags… It was just a long afternoon,” he said after the Austrian GP.

The Russian was so upset with his race that he wished he was someplace else.

At the beginning of the weekend, I would’ve like to go somewhere else… then at least I could have learned a new route. The upside is, I did a sh**ty number of laps and burned a few calories,” he explained.

“Considering our pace, we didn’t have a bad race. We stayed out of the anger and avoided a lot more blue flags than last weekend,” he said.

Looking at Haas and Mazepin

In comparison to their 2018 season, Haas F1 has been facing a very difficult time indeed.

After placing themselves in the P5 position, the team faced their downfall.

Once the team got rid of Kevin Magnussen and Romain Grosjean, the current all-rookie team is finding it hard to find their pace.

Back in Steinberg, not only were the Haas duo at the bottom of the grid, they were the only team to be lapped twice.

Haas is the youngest team on the grid currently. And it is Steiner’s wish to help the team reach its maximum potential.

Unfortunately, financial problems have been a major obstacle for the outfit. This includes their stint with Rich Energy drink.

The brand sponsored the team for half of the 2019 season but walked away after they got the required attention.

Sponsorship has always been a problem for the outfit and their cars ending up in the barriers were not helping their case.

Considering the 2018 season being long ago, the competition currently is massive on the grid. The team also had no experience of handling one rookie and there are two driving right now.

The only other team to have zero points currently is Williams which is picking up pace thanks to George Russell.

Haas really need to get their head in the game if they want to score points.