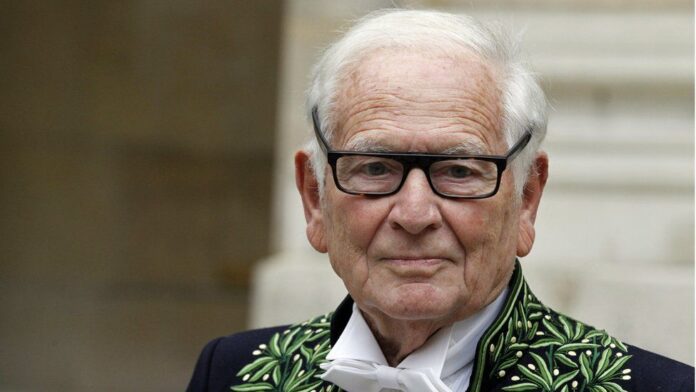 Pierre Cardin was a naturalised French-Italian fashion designer. He was well-known for his avant-garde style and Space Age designs. He was drawn to geometric shapes and motifs.

Pierre Cardin was born in Treviso on July 2, 1922. His parents were wealthy wine merchants who lost everything during World War I. To avoid the blackshirts, they left Italy in 1924 and settled in Saint-Étienne, France, with his ten siblings. His father wanted him to study architecture, but he had an interest in dressmaking since he was a child.

He studied in central France and began his career at the age of fourteen by doing an apprenticeship at a clothier to learn how to make clothing. In 1939, he left his home to work as a tailor in Vichy.

In 1945, Cardin relocated to Paris. After WWII, he studied architecture and worked for the fashion house Paquin. He worked with Elsa Schiaparelli until 1947 when he became head of Christian Dior’s tailleure atelier, but he was turned down for a job at Balenciaga.

In 1950, Cardin established his own fashion house. In 1951, he launched his career by designing about 30 costumes for a masquerade ball hosted by Carlos de Beistegui in Venice. Cardin debuted his haute couture output with his first collection of women’s clothing in 1953, and he joined the Chambre Syndicale, a French association of haute couture designers.

The following year, he opened his first boutique Eve, and debuted the “bubble dress,” a short-skirted, bubble-shaped dress created by bias-cutting over a stiffened base. When he visited Japan in 1957, he was the first couturier to see it as a high fashion market.

Cardin pioneered yet another fashion trend in the 1970s: “mod chic.” This trend applies to a form or a combination of forms that did not exist at the time. He was the first to pair extremely short and ankle-length pieces together. He created dresses with slits and batwing sleeves with unusual dimensions, as well as gypsy skirts and circular movement with structured tops.

These creations allowed him to contrast the geometric shapes that captivated him with both circular and straight lines. Cardin became a fashion icon for launching this popular fashion trend in the early 1970s.

Cardin was inspired by space travel and exploration and visited NASA (National Aeronautics and Space Administration) in 1970, where he tried on the original spacesuit worn by Neil Armstrong, the first human to set foot on the moon. In 1970, Cardin designed spacesuits for NASA.

In 1966, Cardin resigned from the Chambre Syndicale and began exhibiting his collections in his own gallery. He also created the uniforms for Pakistan International Airlines, which were introduced from 1966 to 1971 and were an instant success.

Cardin redesigned the Barong Tagalog, the Philippines’ national costume, in 1971 by opening the front, removing the cuffs that required cufflinks, flaring the sleeves, and minimising the embroidery. In addition, it was tapered to the body, as opposed to the traditional loose-fitting design, and it had a thicker collar with sharp and pointed cuffs.

Pierre Cardin used his name as a brand, first as a prestigious fashion brand, then successfully expanding into perfumes and cosmetics in the 1960s. Since around 1988, the brand has been widely licensed and has appeared on “wildly nonadjacent products such as baseball caps and cigarettes.”

Cardin began his career in industrial design by creating thirteen basic design “themes” that would be applied to a variety of products, each of which would be instantly recognisable and bear his name and logo. A contract with American Motors Corporation was among the business initiatives (AMC). Following the success of the Aldo Gucci-designed Hornet Sportabout station wagon interiors, the automaker began using Cardin’s theme on the AMC Javelin in mid-1972.

Pierre Cardin purchased Maxim restaurants and hotels in 1981. Within three years, he had expanded his business to London, New York, and Beijing. He also licenced the name for a number of food products.

Cardin attempted to sell his company in 2011, valuing it at €1 billion, though the Wall Street Journal estimated it was worth about a fifth of that amount. In the end, he did not sell the brand.

Cardin self-identified as mostly gay, but he had a four-year affair with actress Jeanne Moreau in the 1960s. André Oliver, a fellow French fashion designer who died in 1993, was his long-term business and life partner.

Cardin owned Ca’ Bragadin, a palazzo in Venice. Although he claimed that Giacomo Casanova once lived in this house, some scholars believe that it was owned by another branch of the Bragadin family and that Casanova’s use of it was “somewhat unlikely.”

Since Cardin was captivated by geometric shapes, he used this obsession to construct the Bubble House in 1975. It has a panoramic lounge and ten contemporary bedrooms on more than 1,200 square metres. Cardin enlisted the assistance of Antti Lovag, an architect who assessed the feasibility of Cardin’s design, for this project. With such an avant-garde approach, he introduced the bubble dress in 1954. His unisex clothing designs were mostly experimental and not practical.

Cardin supported a press association in France for arts, dance, and circus managed by Jacqueline Cartier, which included personalities and authors such as Jean Pierre Thiollet, Yves Mourousi, Guy des Cars, and Francis Fehr from the 1980s to the 1990s.

Cardin was appointed Goodwill Ambassador of the United Nations Educational, Scientific, and Cultural Organization in 1991. (UNESCO). Several celebrities, including Nora Arzeneder and Shirley Maclaine, have worn his creations.

Cardin died on December 29, 2020, at the age of 98, at the American Hospital of Paris in Neuilly-sur-Seine. There was no mention of a cause of death.

Read more: Pierre Costante Cardin net worth: How much was the ‘Bubble-dress’ designer worth in 2020?