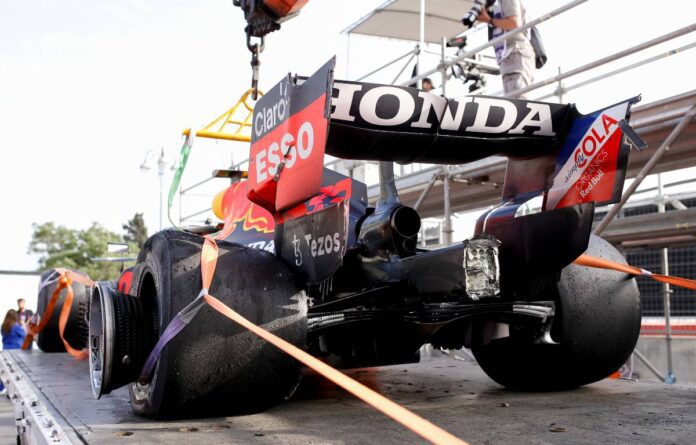 Pirelli stated that Red Bull and Aston Martin did not break any rules with minimum starting pressures and maximum blanket temperatures.

However, things took an unexpected turn once the cars began to run.

What exactly happened during the race

Pirelli, before every race, sets a starting tyre pressure considering the fact that the pressure will increase when the cars race on the track.

Aston Martin and Red Bull, however, did not have any increase in pressure which led them to race with a lowered pressure.

With the low pressure, the standing waves created by high speeds were enough to lead to a tyre failure on Verstappen and Stroll’s rear left tyres.

Pirelli speaks to the media

Pirelli’s head of F1 and car racing, Mario Isola, spoke to the media about the entire situation.

“When you have a lot of energy going into the tyres, with the pressure that is lower compared to the expectation, the result is that on the sidewall you have what we call standing waves.

“Standing waves are putting a lot of energy into the inside shoulder of the tyre. And at a certain point, the tyre breaks. That is what happened, and the reason why we had this situation in Baku.”

Another contributing factor for the accident

One more factor that could have led to this failure was that the data provided by the teams did not exactly match with what happened on the track.

“When we prepare the prescriptions [for minimum pressure], we receive the simulations and we consider margins,” he said.

“The expected loads, the downforce or the speed, are simulated, so it is not exactly the value that we find on track. And in this case in Baku, we also found some parameters that were not exactly what we found on track.”

‘It was a different scenario than expected’

Isola added: “We assume that they are running at a certain pressure, and a certain camber. And with a margin on it, of course, we run in a condition that is okay for the tyre.

“In that case, we didn’t achieve these conditions, not because teams were doing something against the regulations, but because they were looking as usual for performance, and that created a different scenario to what we were expecting.

“And the different scenario was that mainly the tyres were running at a lower pressure compared to expectation.”

Teams did not break any rules

Isola mentioned that no regulations were broken by the teams as there is no minimum running pressure that they have to stick to. However, from the upcoming season, this will change as the teams will have to use a standard pressure sensor.

“If the regulation is not written that there is a running pressure that you have to respect, I cannot say that they were doing something against the regulation in their search of more performance,” continued Isola.

Teams are not just looking to cruise on track

There has always been suspicion that various teams are playing with the tyre pressures. However, it was picked up for the first time in Baku.

“We check every time the running parameters when we receive the telemetry data from the race,” he said. “We check everything on all the teams, of course, and also because it’s an indication for the following race and its prescription, so we use the data,” he concluded.

“I’ll do a shoey”: Norris agrees to follow Ricciardo ritual on...