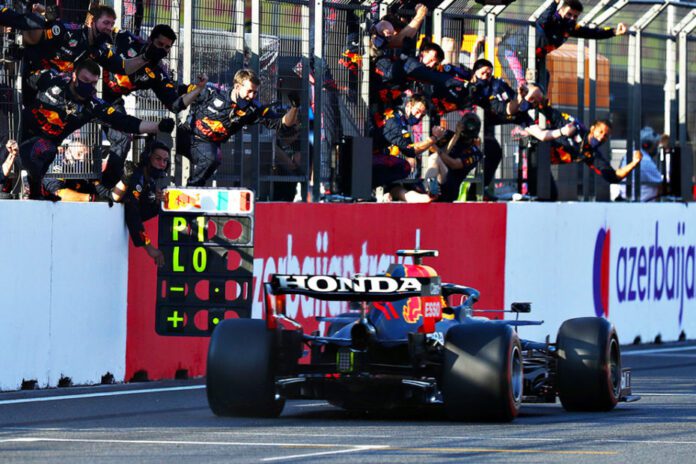 Ecstatic with their win, Red Bull took to social media to take a dig at Mercedes team boss Toto Wolff.

The city circuit of Baku has always played host to a number of unpredictable events and this year was no different.

Max Verstappen was in the lead and with just four laps to go, he suffered a blown-out tyre that sent him crashing into the wall and out of the race.

After his crash, red flags were waved which prompted a restart.

However, Lewis Hamilton suffered a brake balance issue which caused him to drop from P2 to the very last place on the grid killing his chances of scoring points.

To-and-fro exchanges between Wolff and Horner

With the issue of Red Bull’s flexible rear wing, Wolff was very vocal about launching a protest against it.

This led to both team bosses exchanging cheeky comments against each other.

On one hand, Red Bull boss suggested that Wolff should keep his ‘mouth shut’. On the other, Wolff called Christian Horner a ‘windbag’.

Hamilton added his two-cents and recommended that the two bosses should fight it out in a ring.

After Sergio Perez’s victory, Red Bull took to Twitter and posted a tweet pulling Wolff’s leg with his own words.

Eddie Jordan backs Lando Norris to be the next British World...