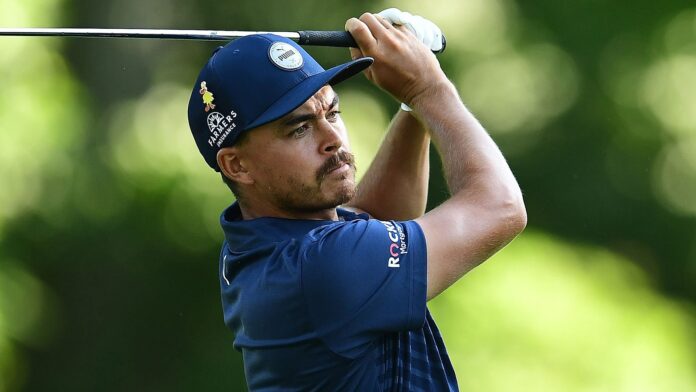 Rickie Fowler is a PGA Tour professional golfer from the United States.

Fowler grew up in Murrieta, California, and attended Murrieta Valley High School. He spent years exclusively playing on a driving range and is nearly entirely self-taught. Fowler won the SW League Final in his senior year of high school with a total score of 64-69=133 and led his team to the state final in 2007.

Fowler attended Oklahoma State University in Stillwater after graduating from high school. On October 1, 2007, he won his first collegiate competition at the Fighting Illini Invitational held by the University of Illinois, shooting a 203 (70-63-70) to win by one stroke.

Fowler won the Western Junior and competed in the US Amateur in the summer of 2005, where he was defeated by eventual champion Richie Ramsay.

At the 2006 U.S. Junior Amateur, Fowler shot a 137 for two rounds and was eliminated in the second round of match play. Philip Francis won the championship.

Fowler had a key role in the United States Walker Cup win in 2007. His foursomes record was 2–0, and his singles record was 1–1, for a total of 3–1. Billy Horschel was his foursome partner in both of their triumphs. Fowler won the Sunnehanna Amateur in June and the Players Amateur in July of that year.

In 2009, Fowler finished second on the Nationwide Tour for the first time in his career in the Nationwide Children’s Hospital Invitational, losing in a playoff to Derek Lamely.

Following the Walker Cup, Fowler went professional and made his pro debut at the Albertsons Boise Open on the Nationwide Tour. Titleist announced in September 2009 that Fowler has signed a multi-year equipment contract with them. He afterwards secured a contract with Rolex.

The Justin Timberlake Shriners Hospitals for Children Open was Fowler’s debut PGA Tour event as a professional, and he finished tied for eighth. The Frys.com Open, held at Grayhawk Golf Club in Scottsdale, Arizona, was his second PGA Tour tournament.

In July 2011, Fowler tied for the 54-hole lead at the AT&T National, but a double bogey on the first hole on Sunday wrecked his bid for his first PGA Tour victory. Two weeks later, Fowler tied for fifth place in The Open Championship at Royal St George’s. In August, Fowler tied for second place at the WGC-Bridgestone Invitational behind winner Adam Scott, propelling him to number 28 in the global rankings.

At the PGA Championship, Fowler carded 74-69-75-68 to finish in a tie for 51st place with a six-over-par total of 286. Fowler surged up the leaderboard early on the third day with three birdies in the opening five holes, only to fall later in the round with two triple bogeys, ultimately eliminating his hopes of a first major championship and PGA Tour victory.

Following a tie for fifth place at the Masters in April, Fowler had his best finish of the year at the U.S. Open at Pinehurst No. 2 in North Carolina. Fowler and Erik Compton tied for second place at 1, their highest performance at a major, however, they were eight strokes behind champion Martin Kaymer. Fowler finished second again at the Open Championship, this time at Royal Liverpool Golf Club in Hoylake, England. He started the final round six strokes behind Rory McIlroy and ended tied for second with Sergio Garcia at 15, two strokes behind McIlroy.

At the PGA Championship in August, Fowler, Phil Mickelson, Henrik Stenson, and McIlroy competed for the title on a rain-soaked Valhalla Golf Club near Louisville.

On December 3, 2017, Fowler won the Hero World Challenge after shooting a 61 in the fourth round, which was 11 under par. He came from 7 strokes behind the 54-hole leader, Charley Hoffman, to win by four strokes. The 61 was a course and tournament record, as well as Fowler’s personal best round as a professional.

At the 2018 Masters Tournament, Fowler recorded a 72-hole score of 14 (274) to finish one stroke behind champion Patrick Reed. It was his seventh top-5 major finish, giving him multiple top-5 finishes in each major, but he has yet to win one.

In September 2018, Fowler qualified for the United States Ryder Cup team. The European squad trounced the American team 17 1/2 to 10 1/2. He had a 1-3-3 record. He was defeated by Sergio Garcia in his singles encounter.

In 2017, Fowler began dating track and field amateur athlete Allison Stokke. They got engaged in June of 2018. They will marry in October 2019.

Fowler now lives in Jupiter, Florida, after moving from Las Vegas after the 2010 season. Yutaka, Fowler’s middle name, is derived from his Japanese maternal grandparents. His maternal grandmother is of Navajo Native American descent. Fowler wears orange on the final day of a golf tournament to celebrate Oklahoma State University.

Along with fellow PGA Tour players Ben Crane, Bubba Watson, and Hunter Mahan, Fowler is one of four golfers in the “Golf Boys” clique. On the eve of the 2011 U.S. Open, The Golf Boys released a YouTube video of the song “Oh Oh Oh” Farmers Insurance is contributing $1,000 for every 100,000 video views. The charitable proceeds were split between Farmers and Ben Crane.

Fowler has at least six tattoos on his body. The first is a block “G” at his left elbow in memory of Georgia Veach, the daughter of a Seattle preacher and friend. Georgia was born with a condition known as lissencephaly. Just before the 2015 Presidents Cup, Fowler got the tattoo.

The second is from January 2016 and has the name Yutaka Tanaka (Rickie’s grandfather) written in Japanese calligraphy on his left bicep. The third tattoo, featuring Olympic emblems, appeared mere weeks after he competed in the 2016 Summer Olympics. Rickie also has a capital F at the base of his right wrist, a cross on his left index finger, and a phrase at the base of his right left wrist.