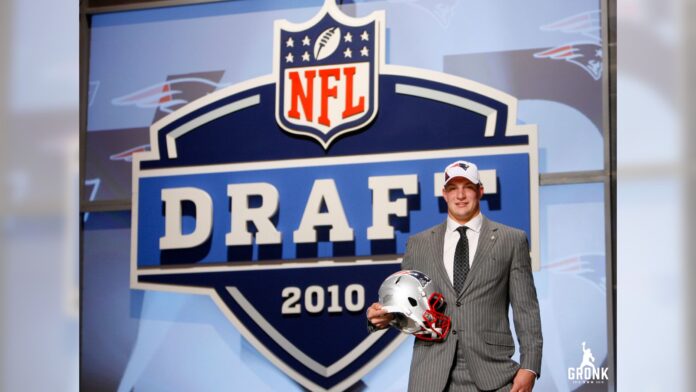 Rob “Gronk” Gronkowski is an American football player. His net worth is estimated to be $45 million. Gronkowski was drafted by the New England Patriots in 2010 during his sophomore year of college, and he remained with the team until his retirement in 2018.

He won three Super Bowls as a Patriot and set numerous records, including the most touchdown receptions by a tight end. He is a four-time All-Pro selection and has appeared in five Pro Bowls. Gronk signed a six-year extension with the Patriots in 2012. His extension deal, worth $54 million, was the largest in NFL history between a team and a tight end at the time.

Rob still had a year left on his contract when he announced his retirement. Following that, the Patriots traded him to the Tampa Bay Buccaneers in 2020. Gronkowski’s retirement was influenced by pain and injuries

He stated in April 2020, “Taking a year off was hands down the best decision I made, not just in my career, but also for my health and well-being.”

Gronk earned around $60 million in salary alone during his time in the NFL. Off the field, he earned tens of millions of dollars through endorsements with companies such as Tide.

Rob claimed in his 2015 book “It’s Good To Be Gronk” that he has not spent a dime of his NFL salary and instead lives solely on the proceeds of his endorsement deals. Gronkowski has endorsed brands like Nike, Dunkin’ Donuts, Visa, T-Mobile, Lyft, Cheerios among others.

Rob Gronkowski was born on May 14, 1989, in Amherst, New York, as Robert James Gronkowski. He grew up in Williamsville, New York, with his mother, Diane, father Gordon (a former Syracuse University football player), and brothers Glenn, Dan, Gordie, and Chris, all of whom played professional football.

Rob’s favourite sport was hockey until the age of 14, when he switched to basketball. He played football (tight end, defensive end, and freshman kickoff specialist) for Williamsville North High School, basketball (centre), and baseball (first baseman) for the school, and after the family moved to Pennsylvania, he played football for Woodland Hills High School.

During his high school career, Gronkowski was named to the All-Western New York first team, a SuperPrep All-American, and an Associated Press Class 4-A All-State team. After graduating from high school in 2007, Rob was recruited by several colleges and chose to attend the University of Arizona.

Gronk majored in Pre-Business at the University of Arizona and played football for the Wildcats from 2007 to 2009. As a freshman, he averaged 18.8 yards per reception, the most of any player on the team.

Rob was named the John Mackey National Tight End of the Week twice during the 2008 season, as well as an All-Pac-10 first-team tight end and an Associated Press third-team All-American. He had back surgery in 2009 and missed his junior season as a result.

Gronk was the 42nd overall pick in the 2010 NFL Draft, and he signed a four-year, $4.4 million contract with the New England Patriots, plus a $1.76 million signing bonus.

During his rookie season, the Patriots won the AFC East, and Rob was nominated for three Pepsi NFL Rookie of the Week awards and was named to the NFL All-Rookie Team. While playing for the Indianapolis Colts in 2011, he set an NFL record for touchdowns scored by a tight end in a single season.

The Patriots advanced to Super Bowl XLVI but were defeated by the New York Giants. Gronkowski sprained his ankle during the AFC Championship. An MRI after the game revealed that he had strained ligaments that necessitated surgery.

Read more: Dwayne ‘The Rock’ Johnson net worth: How much does the WWE legend-turned-actor make annually?

Xbox net worth: What is the net worth of the popular...