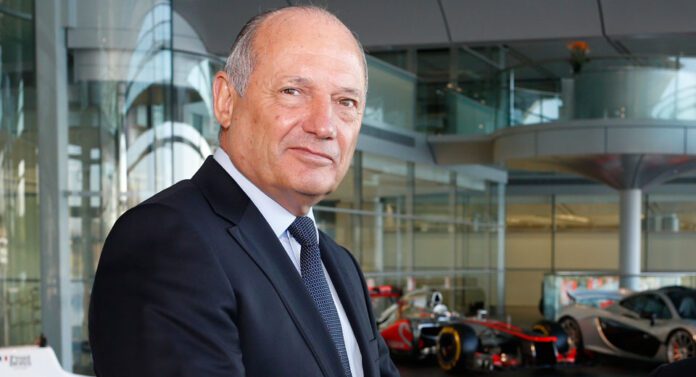 Ronald Dennis (age 74), is an official British Business Ambassador for the United Kingdom and a British businessman.

He is mostly known as the chairman and founder of McLaren Group. He was also the owner and CEO of the outfit.

Until June 2017, he remained the director of the company and held a 25 percent share.

Ronald started his career as a mechanic and went on to form the successful junior formulae team, Rondel Racing.

In 1980, he started Project Four Racing which took over the management of the McLaren team.

Between 1981 and 2009, Ron was the leading person of the McLaren Formula One group and was the key component in transforming the outfit into a world championship contender.

He also won the Constructors’ and Drivers’ world championships with Formula 1 driver and an aviation entrepreneur, Niki Lauda.

Ron Dennis is one among six British persons to become involved in politics as a British Business Ambassador. This was especially in the field of advanced engineering and manufacturing.

He is also known as the main trustee for Tommy’s, a miscarriage help charity.

Ron is the worldwide consultant for the state-owned China Minsheng Investment Group, the chairman for the United Kingdom Summit, and also the former owner of Absolute Taste.

Dennis became the chairman of the British East Asian Council in 2014.

He was also a shareholder within the luxury watchmaker TAG Heuer.

Ron was born and raised in Woking, a town in northwest Surrey, England. At Guildford Technical College he studied motor vehicle engineering.

Alongside lead driver Jochen Rindt, at the age of 18, he started working for the Cooper Formula One team as a mechanic in 1966.

After two years, Rindt moved to Brabham, a British car manufacturer, and Formula One racing team and took Dennis with him.

Rindt moved to Team Lotus for the 1969 season. However, Dennis chose to stay to work for Sir Jack Brabham.

In 1971, Sir Brabham retired and Dennis decided to start his own team with his colleague Neil Trundle. In the same year, in Woking, he founded Rondel Racing.

By the middle of the 1970s, the team found some considerable success in Formula Two. However, due to a lack of funds, Ron lost ownership to the team and Rondel Racing was renamed Token Racing.

He formed a Marlboro-backed F2 team with two talented drivers from Ecuador. Once again his cars started becoming race winners after he founded the Project Three team in 1975.

In the next year, Ron founded Project Four Racing.

In 1979 and 1980, with Marlboro’s backing, his team won the Formula 2 and Formula 3 championships. In the same year, he hired John Bernard, a talented Formula One designer, and started to work on an innovative new car.

He returned to Formula One at the same time when McLaren faced a disappointing performance. Afterward, Ron took over the McLaren team and rebranded it as McLaren International.

In September 1980, Prior to Dennis’s arrival at McLaren, the team was experiencing a very uncompetitive stint.

The team had last won a Grand Prix with the defending World Champion James Hunt.

Even though in his youth, Dennis recognized the young Frenchman’s potential. However, he was unable to stop him from moving to the Renault team for the 1981 season.

In the same year, many other teams struggled to duplicate Barnard’s revolutionary carbon-fiber chassis.

Ron and his business partners bought out the opposite McLaren shareholders, Teddy Mayer and Tyler Alexander in 1981.

In 1983, he persuaded Mansour Ojjeh, a Williams backer, to become a partner with McLaren International.

Ojjeh, a French Saudi Arabian-born entrepreneur, invested in the Porsche-built turbocharged engines which carried the name of his company – Techniques d’Avant Garde.

In 1990-91, McLaren continued to dominate the sport by claiming back-to-back titles. However, after that, McLaren did not win another title for seven years.

With many disappointing partnerships, Ron started to search for a fourth engine partner.

Afterward, he struck a deal with Mercedes-Benz for the supply of engines from 1995 onward. This acquaintance continued until 2014.

In 2000, McLaren’s team leader Mika Häkkinen left the sport and Kimi Räikkönen was signed. After a brief unlucky stint, McLaren was at the top of the sport again in 2005.

Soon after, McLaren stopped perfecting their current car and started focusing on the 2007 MP4-22 car.

In August 2007, Ron sent an open letter to Luigi Macaluso, the president of the Italian motorsport authority. The letter alleged that Ferrari’s car that was used to win the 2007 Australian Grand Prix was illegal.

In March 2011, because of various traffic offenses, he was banned from driving for six months.

He separated and announced divorce from his wife, Lisa Dennis, of 22 years. He has three children with her.

Ron’s estimated salary is not known. However, his net worth is pretty close to 450 million pounds sterling.