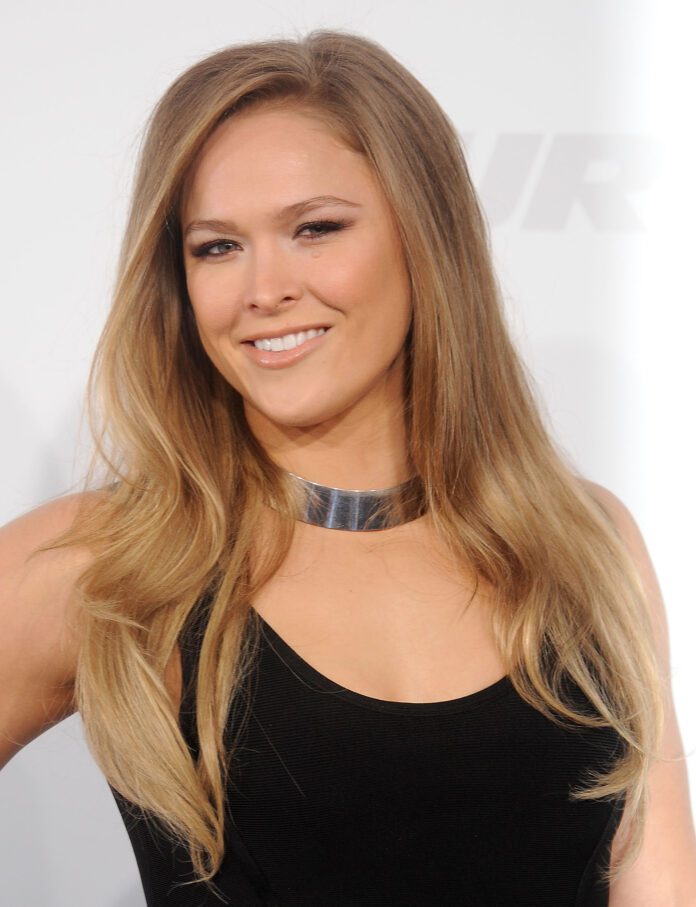 Ronda Jean Rousey was born on February 1, 1987 (age 34), and is an American professional wrestler. She is also a retired MMA fighter and judoka.

She is most popular for his tenure in UFC and her stint in WWE.

Ronda also goes by the nickname ‘Rowdy’ which she adapted from late professional wrestler Roddy Piper.

Ever since she took time off from Wrestlemania back in April 2019, she has not been much active in the sport.

Ronda was the first American to win an Olympic medal in Judo after claiming bronze at the 2008 Summer Olympics.

Following that, she began her career in Mixed Martial Arts.

She had her MMA debut with King of the Cage which she won and then moved on to Strikeforce.

Here, she earned the title of the last Strikeforce Women’s Bantamweight Champion. This was just before UFC bought Strikeforce in 2011.

Following that, she became the inaugural female champion after she was named UFC Women’s Bantamweight Champion.

Rousey was a part of the first women’s fight in UFC history. She took on Liz Carmouche at UFC 157 to defend her title.

Later, she was able to set a record for most UFC title defenses by a woman which was six.

She was inducted into the UFC Hall of Fame back in 2018 and was the first female fighter to do so.

The same year, she signed a contract with WWE where she began her professional wrestling career.

Her first appearance was at the 2018 Royal Rumble. Additionally, she debuted at WrestleMania 34.

Rousey also won the Raw Women’s Championship which was her first WWE and her first wrestling title. She also headlined the inaugural WWE all-women’s pay-per-view event.

She was able to defend her title with success at WWE Evolution.

At WrestleMania 35, she ended up losing her title in the first-ever women’s WrestleMania main event. This was a triple threat match.

Her title of Raw Women’s Champion was the second-longest in the history of the title with 231 days.

Rousey is the only woman who has managed to win a championship title in both WWE and UFC.

Additionally, she is also the only woman who has headlined a pay-per-view event in both companies.

In a 2015 ESPN fan poll, Rousey was declared the best female athlete of all time. She was also given the title of “one of the defining athletes of the 21st century” by Fox Sports.

Also in 2015, she released her autobiography – My Fight / Your Fight.

Ronda Jean Rousey was born on February 1, 1987, in Riverside, California. She is the youngest of three daughters.

Her mother was a decorated Judoka and was the first American to win a World Judo Championship in 1984.

Rousey’s stepfather was an aerospace engineer.

Her biological father broke his back during a sledding accident. After learning that he would be disabled throughout his life, he committed suicide when Rousey was eight.

Rousey struggled with a speech disorder till she was six years old. This was due to the fact that she was born with an umbilical cord around her neck.

She retired from judo at 21 years old and began her MMA career at 22.

Rousey was once in a relationship with fellow UFC fighter Brendan Schaub. However, in 2015, there were rumors that she is dating UFC fighter, Travis Browne.

Browne had knocked out Schaub in a bout the previous year.

On April 21, 2021, Rousey revealed that she was pregnant with her first child, a girl.

Rousey, in her autobiography, mentioned a former boyfriend she called “Snappers McCreepy” who had taken nude pictures of her without her consent.

Rousey, when she met him, hit him across his face but he refused to let her go as he tried to explain himself.

She further attacked his face with two punches, one more slap, one knee, then “tossed him aside on the kitchen floor.”

She then deleted the photos and erased his hard drive.

Her fear that the pictures might still be out there prompted her to pose for ESPN magazine’s Body Issue.

This was so that the pictures would be public based on her own terms.

However, there was criticism against Rousey that stated she was involved in domestic abuse.

Rousey posed nude on the cover of ESPN The Magazine‘s 2012 Body Issue.

Rousey was the first woman to appear on the cover of Australian Men’s Fitness in 2015.