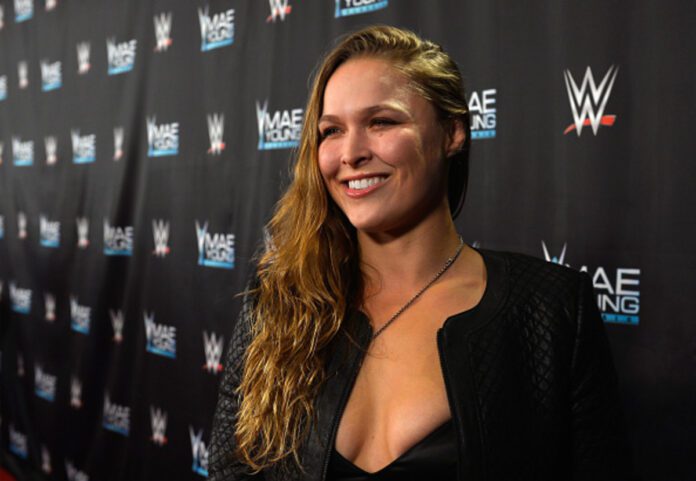 Ronda Rousey is a former American professional wrestler, mixed martial artist, and judoka. She is best recognised for her career as a WWE wrestler and in the Ultimate Fighting Championship.

Ronda Jean Rousey was born on February 1, 1987, in Riverside, California, as the youngest of AnnMaria De Mars and Ron Rousey’s three daughters. In 1984, her mother, a judoka, became the first American to win the World Judo Championship.

Due to apraxia, a neurological developmental speech sound condition, Rousey struggled with speech and couldn’t create a meaningful phrase for the first six years of her life.

When Rousey was three years old, her mother and father moved from Riverside, California, to Jamestown, North Dakota, to get intense speech treatment from doctors at Minot State University. Rousey dropped out of high school and later earned a GED. She retired from her judo career at the age of 21 and proceeded to her MMA career when she was 22.

At the 2008 Summer Olympics, Ronda Rousey became the first American woman to win an Olympic medal in judo.

She made her MMA debut for King of the Cage before joining Strikeforce, where she became the final Strikeforce Women’s Bantamweight Champion before Strikeforce was acquired by the UFC in 2011.

She became the organization’s first female champion when she was elected UFC Women’s Bantamweight Champion. Rousey took part in the first women’s fight in UFC history when she successfully defended her title against Liz Carmouche at UFC 157, and she later set the record for most UFC title defences by a woman. In 2018, she became the first female fighter to be inducted into the UFC Hall of Fame.

Rousey is the only woman to have won a championship in both the UFC and WWE, as well as to have headlined a pay-per-view event in both organisations.

At the age of 17, Rousey was the youngest judoka to qualify for the 2004 Olympic Games in Athens. In 2004, Rousey won a gold medal at the World Junior Judo Championships in Budapest, Hungary.

In August 2008, Rousey competed in the 2008 Olympic Games in Beijing, China. She lost in the quarterfinals to ex-world champion Edith Bosch of the Netherlands, but she advanced to the bronze medal match via the repechage bracket. Rousey is the first American woman to win an Olympic medal in women’s judo since the sport was added to the Olympic programme in 1992.

Rousey made her Strikeforce debut against Sarah D’Alelio on July 30, 2011 at Strikeforce: Fedor vs. Henderson in Hoffman Estates, Illinois. The bout was rescheduled for August 12, 2011 on the main card of Strikeforce Challengers 18 in Las Vegas, Nevada. After an armbar was executed early in the first round, Rousey defeated D’Alelio through technical submission.

On February 23, 2013, Rousey defended her championship against Liz Carmouche at UFC 157. Despite being caught in an early standing neck crank attempt by Carmouche, Rousey went on to successfully defend her Bantamweight Championship title, winning by submission in the first round due to an armbar.

Rousey made an unannounced cameo at the Royal Rumble on January 28, 2018, attacking Raw Women’s Champion Alexa Bliss, SmackDown Women’s Champion Charlotte Flair, and Asuka, who had just won the inaugural women’s Royal Rumble match. ESPN announced during the segment that she had signed a full–time contract with WWE.

Rousey will make her in-ring debut at WrestleMania 34, WWE’s premier event, in a mixed tag team match against Stephanie McMahon and Triple H, according to the March 5 episode of Raw. Rousey defeated McMahon with her trademark armbar submission hold to clinch the victory for her team.

Ronda Rousey currently resides in Venice, California. Rousey became a vegan after the 2008 Olympics in Beijing, but in 2012 she described her diet as “kind of a mix between a Paleo and a Warrior diet” attempting to consume everything.

She has previously spoken about her struggles with body image. She elaborated, “Martial arts made you a geek in school, and I became self-conscious about being too macho. I was 16 years old and had ringworm and cauliflower ears. People mocked my arms and referred to me as ‘Miss Man.’ I didn’t know how stupid these individuals were until I got older. I’m fantastic.”

In 2015, she donated funds for the Black Jaguar-White Tiger Foundation by auctioning off signature T-shirts.

Rousey dated fellow UFC fighter Brendan Schaub at one point. After a picture of the two together circulated on Twitter in August 2015, Rousey was supposed to be in a relationship with UFC fighter Travis Browne, who knocked out Schaub in a fight the previous year, and Browne’s estranged wife Jenna Renee Webb accused the two of seeing one other.

Browne was still married at the time and was being investigated by the UFC after Webb publicly accused him of domestic violence in July 2015. Browne announced his relationship with Rousey in October 2015.

The next day, Rousey announced her relationship with Browne. Ronda Rousey and Browne got engaged in New Zealand on April 20, 2017, and married on August 28, 2017, in Browne’s home state of Hawaii. Rousey confirmed on her official YouTube account on April 21, 2021, that she is four months pregnant with her first child, a girl.

Rousey talked of an encounter with a former boyfriend she dubbed “Snappers McCreepy” two weeks before her first fight with Miesha Tate in her autobiography, My Fight, Your Fight. When a furious Rousey confronted him, she “slapped him across the face so hard [her] hand hurt.”

According to Rousey, he then refused to let her leave while explaining, so she attacked his face with two punches, one more slap, one knee, and then “tossed him aside on the kitchen floor.”

He followed her to her car, seizing the steering wheel, so she “dragged him out onto the sidewalk, and left him writhing there” Rousey deleted the photos and erased his hard drive, but she was inspired to appear for ESPN magazine’s Body Issue so that nude pictures of her could be seen on her own terms.