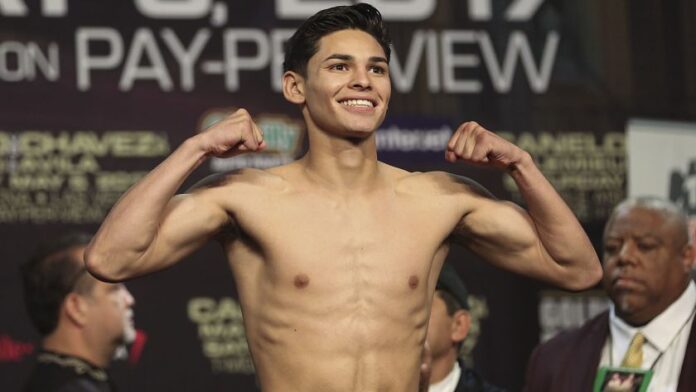 Ryan is ranked as the world’s sixth-best active lightweight boxer by BoxRec, third by The Ring magazine, and fourth by ESPN as of June 2021.

At the age of seven, Ryan started boxing and has amassed an amateur record of 215-15. He also became the national amateur champion 15 times.

Ryan’s first fight as a professional was against Edgar Meza on 9 June 2016, at the age of 17, and he won the fight by TKO.

In November 2016, Ryan signed with Golden Boy Promotions. His debut at The Forum was announced by Oscar De Hoya on December 17, 2016, against Smith-Hopkins.

Ryan won the fight in the second round by knockout.

García extended his contract with Golden Boy Promotions and this time it was a new five-year deal. However, details about the deal were not disclosed.

Ryan’s next fight was announced by Golden Boy. This fight would be the co-main event of Canelo Álvarez vs. Sergey Kovalev.

Ryan went on to fight Romero Duno at the MGM Grand Garden Arena.

He successfully captured the WBC Silver lightweight title by defeating Duno in the first round with a knockout.

At the Honda Center, Anaheim Ryan would be fighting a Nicaraguan boxer, Francisco Fonseca on February 14, 2020, announced by Golden Boy.

In this fight, Ryan knocked out Fonseca in the first round by landing seven punches and ended the fight by landing a lead left hook.

For the interim WBC lightweight title at Fantasy Springs Resort, Indio, California, it was announced García would be facing Luke Campbell, an Olympic gold medalist on January 2, 2021(the date after rescheduling the fight).

The venue was then changed to American Airlines Center, Dallas, Texas. The reason was that Campbell contracted Coronavirus.

In the first round, Ryan was merely surviving. However, in the second round, Campbell landed some great punches on Ryan.

But in the seventh round, Ryan knocked him out with a left hook and successfully defeated him.

The fight was set for July 9. However, in April, Ryan withdrew from the fight, to “manage his health and well-being”.

Joseph Diaz (Former IBF super featherweight champion) agreed to move up to lightweight, to fight in the place of Ryan, and fight Fortuna on July 9.

García was subsequently displaced of his newly crowned title, and the title was on the line for Diaz and Fortuna.

Ryan has made headlines when he deactivated his Twitter account by saying that the social media platform is getting toxic day by day and he is not happy with this.

Ryan has a brother (Sean García) who is also a professional boxer and has three sisters (Demi, Kayla, and Sasha).

Henry, his father, and Lisa, his mother, were actively involved in his amateur career.

Ryan’s parents had supported him even after his amateur career and his father became one of his trainers. His mother played a key role acting as his Administrative Assistant for commercial projects.

His father also translates the Spanish language for him and he is also to be known as Ryan’s second assistant on the training team.

Ryan has an ancestry of Mexico but does not speak Spanish. However, he wears both U.S and Mexican flags into the ring, as he is a born American.

Ryan likes to keep his personal life more private and does not discuss his relationship with Drea Celina, a fitness expert, and social media influencer.

It is known that they both have been in a long relationship and have two daughters (Rylie and Bela) together.

Ryan also has posted a few pictures of him and Drea back when she was pregnant.