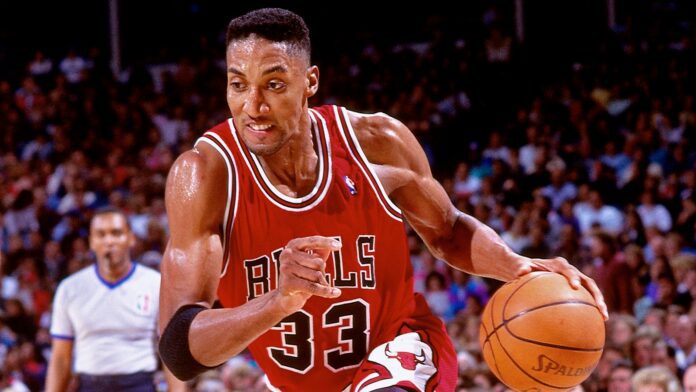 He has played with Chicago Bulls in the National Basketball Association (NBA) and has successfully won six NBA Championships.

Scottie has played a big role in transforming and popularizing the Chicago Bulls with Michael Jordan back in the 1990s.

His father suffered from a stroke that paralyzed his right side of the body. This also prevented him from speaking and walking. Before his stroke, he used to work in a paper mill.

In Hamburg High School, Scottie played point guard and helped his team to the state playoffs.

In his college at the University of Central Arkansas, he received the Consensus NAIA All-American honors after exhibiting some great performances with an average of 60 percent field goal shooting, 23.6 points, and 4.3 assists.

This made him a dominant player in the Arkansas Intercollegiate Conference. At this time, he also drew the attention of NBA scouts.

After having been attracted to the NBA, he became a part of Chicago’s young forward duo with Horace Grant.

In the team practices, Pippen played along with Jordan. Both worked on each other’s offense and defense. Over his career, Pippen got better at his game, with Michael Jordan motivating and helping him to refine his skills.

In the 1998 NBA Playoffs, Pippen helped Jordan to take the Bulls into the conference semifinals. It happened for the first time in over a decade for the Bulls.

He became the NBA’s No. 3 leader in steals. This included recording high points of 16.5 per game, 6.7 rebounds, and 48.9 fields goal shooting.

Pippen helped the NBA to enter the Eastern Conference Finals in 1989 and 1990.

However, the Bulls were eliminated by the Detroit Pistons. In the 1990 final, a migraine affected Pippen’s game to just pulling 10 goal attempts.

In the 1990-91 NBA season, Pippen came out as the Bulls’ primary defensive stopper. With the help of Michael Jordan, he continued to improve his game.

With his second triple-double, Pippen led the Bulls to win against the Pacers. Against the Charlotte Hornets, with a win, he scored a season-high of 43 points.

He impressed and attracted a lot of people with his performance. He was also awarded the NBA All-Defensive Second Team honors in the 1990-91 season.

Pippin led the Bulls to win against the Los Angeles Lakers in the NBA Finals. Pippin was one of the original Dream Team which played in the Olympics in Barcelona, Spain.

Pippin and Jordan led the U.S. team in winning the gold medal.

Additionally, both players became the first to win an Olympic gold medal and an NBA championship in the same year.

With the retirement of Michael Jordan, Pippen emerged from his shadows.

He led the Bulls to finish the season with 55 wins. His performance became even better which resulted in him being second in the NBA in steals per game; including 22.0 points, 5.6 assists, and 0.8 blocks per game.

Without Jordan, Pippen had to face the most controversial moment in his career during the NBA Playoffs in 1994.

In a game with the New York Knicks, Pippen got angry over Jackson for not letting him be the potential game-winner.

At the Atlanta Olympics, Pippen won the Olympic gold medal and NBA championship, in the same year. However, it was all made possible with the return of Jordan and Dennis Rodman.

It happened to be the best regular season in NBA history at the time.

Pippen and Jordan were called the NBA’s 50 Greatest Players.

In the same season, the league also celebrated its 50th anniversary.

With a win over the Denver Nuggets, Pippen made his career-high of 47 points; including 2 steals, 4 rebounds, and 5 assists.

In 1997-98, Pippen intentionally showed his disinterest for the season as he pushed his unavailability into the regular season.

This increased the pressure on Jordan to lead the team towards the final championship. Pippen ultimately rejoined the game.

He and Jordan led the Bulls to their second three-peat at the 1998 NBA Finals.

In 2005, the Chicago Bulls retired his jersey number in a ceremony on December 9.

During the ceremony, that night, Peppin, Jordan, Jackson, and Rodman with Horace Grant reunited and played against Los Angeles. Along with Pippen, the Bulls retired Jordan’s, Love’s, and Sloan’s jerseys too.

Scottie, in an interview, agreed with GQ that Phil Jackson was/is a racist. That his decision to give Toni the final shot in the 1994 playoff was a decision based on racism.

Then on July 11, 2013, Camran Shafighi filed a lawsuit against Pippen for $4 million. This was over an incident that had taken place at the restaurant in Malibu, California on June 23.

Shafighi alleged that Pippen attacked him and he had to be taken to the hospital. However, on August 27, the district attorney did not file any charges against Pippen.