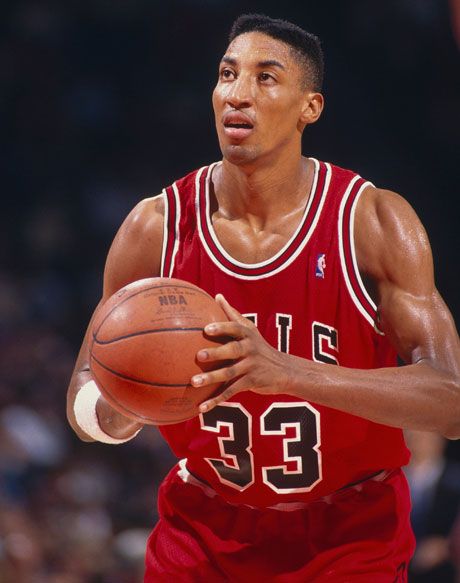 Scottie Pippen is a former professional basketball player from the United States.

Scotty Maurice Pippen Sr Pippen was born to Ethel and Preston Pippen in Hamburg, Arkansas. Pippen graduated from Hamburg High School. As a senior, he led his team to the state playoffs and earned all-conference honours while playing point guard, but he was not offered any college scholarships.

He started his college career as a walk-on at the University of Central Arkansas after being discovered by the school’s head basketball coach, Don Dyer.

As a senior, his per-game averages of 23.6 points, 10 rebounds, 4.3 assists, and near 60% field goal shooting earned him consensus NAIA All-American honours in 1987 and established him as a dominant player in the Arkansas Intercollegiate Conference, attracting the attention of NBA scouts.

Pippen played in the National Basketball Association (NBA) for 17 seasons, winning six NBA championships with the Chicago Bulls. During the 1990s, Pippen and Michael Jordan were instrumental in transforming the Bulls into a championship team and popularising the NBA around the world.

Pippen, regarded as one of the greatest small forwards of all time, was named to the NBA All-Defensive First Team eight times in a row and to the All-NBA First Team three times. He was a seven-time NBA All-Star and the MVP of the 1994 NBA All-Star Game.

Pippen is the only NBA player to have won an NBA championship and an Olympic gold medal in the same year twice, in 1992 and 1996. He took part in the 1992 U.S. Olympic “Dream Team” that outscored its opponents by 44 points on average.

After scouting Pippen prior to the 1987 NBA Draft, the Chicago Bulls made a trade with the Seattle SuperSonics that sent Pippen, who was drafted fifth overall, to the Bulls in exchange for the eighth pick, Olden Polynice, and future draught pick options.

He joined Chicago’s young forward duo with 6-foot-10-inch (208 cm) power forward Horace Grant (the 10th overall pick in 1987), but both came off the bench to back up Brad Sellers and Charles Oakley during their rookie seasons.

Scottie made his NBA debut on November 7, 1987, against the Philadelphia 76ers for the Chicago Bulls. In 23 minutes, he had 10 points, 2 steals, 4 assists, and 1 rebound as the Bulls won 104–94. Pippen refined his skills and gradually developed many new ones over his career with teammate Michael Jordan as a motivational and instructional mentor.

At the turn of the decade, Pippen emerged as one of the league’s premier young forwards, setting career highs in points (16.5 points per game), rebounds (6.7 rebounds per game), and field goal shooting (48.9 percent), as well as ranking third in steals in the NBA (211). These accomplishments earned Pippen his first NBA All-Star selection in 1990.

On September 21, 1991, Pippen was announced as a member of the United States men’s Olympic basketball team, along with nine other players (two more would be later selected). The team was set to represent the United States of America in the 1992 Summer Olympics in Barcelona.

Michael Jordan retired prior to the 1993–94 season, and Pippen emerged from Jordan’s shadow. That season, he was named All-Star Game MVP, led the Bulls in scoring, assists, and blocks, and finished second in the NBA in steals per game, averaging 22.0 points, 8.7 rebounds, 5.6 assists, 2.9 steals, and 0.8 blocks per game while shooting 49.1 percent from the field and a career-high 32 percent from 3-point range.

With Michael Jordan’s return and the addition of multiple NBA rebound leader Dennis Rodman, the Bulls posted the best regular-season record in NBA history at the time (72–10) en route to their fourth title against the Seattle SuperSonics in 1995–96.

Later that year, Pippen became the first person in history to win both an NBA championship and an Olympic gold medal in the same year, when he represented Team USA in the Atlanta Olympics.

The Bulls began the 1996–97 NBA season with a 17–1 record and finished with a league-best 42–6 record at the All-Star break. As part of the NBA’s 50th season, both Pippen and Jordan were named among the league’s 50 Greatest Players.

On February 18, Pippen set a career-high with 47 points in a 134–123 win over the Denver Nuggets, shooting 19–27 from the field and adding 4 rebounds, 5 assists, and 2 steals in 41 minutes of action. On February 23, Pippen was named “Player of the Week” for the week ending February 17, his fifth and final time receiving the honour.

For his efforts in the 1996–97 NBA season, Pippen was named to the NBA All-Defensive First Team for the seventh time in a row, as well as All-NBA Second Team honours.

Pippen, the franchise’s second all-time leader in points, assists, and steals, was traded by the rebuilding Bulls to the Houston Rockets in 1998 in exchange for Roy Rogers and a second-round pick in the 2000 NBA draught (Jake Voskuhl).

The Rockets finished the season with a 31–19 record, good for third place in the Midwest Division and fifth place in the Western Conference. In the first round of the playoffs, they faced the Los Angeles Lakers.

In game 3 of the series, Pippen scored 37 points, grabbed 13 rebounds, had four assists, and one block to keep the series alive. The following game, the Lakers defeated Houston 98–88 to win the series.

On October 2, 1999, Pippen was traded by the Houston Rockets to the Portland Trail Blazers in exchange for Stacey Augmon, Kelvin Cato, Ed Gray, Carlos Rogers, Brian Shaw, and Walt Williams.

The Trail Blazers finished with a 59–23 record and finished second in the Pacific Division and third in the Western Conference under head coach Mike Dunleavy. Pippen appeared in all 82 games that season, averaging 12.5 points, 5 assists, and 6.3 rebounds.

Pippen took on a veteran role on the team to help guide the young Bulls team, but he was plagued by injuries throughout the season and was only able to play in 23 games, averaging 5.9 points, 3.0 rebounds, and 2.2 assists per game.

On February 2, 2004, he played his final NBA game against the Seattle SuperSonics, scoring two points, one rebound, and three assists in eight minutes of action in a 109–97 loss.

Pippen announced his retirement on October 5, 2004.

Pippen has been married twice, the first time in 1988 to Karen McCollum. Before divorcing in 1990, they had a son named Antron. In 1997, he married Larsa Younan. Scotty Jr., Preston, Justin, and Sophia are their four children. Their divorce was finalised in early 2021.