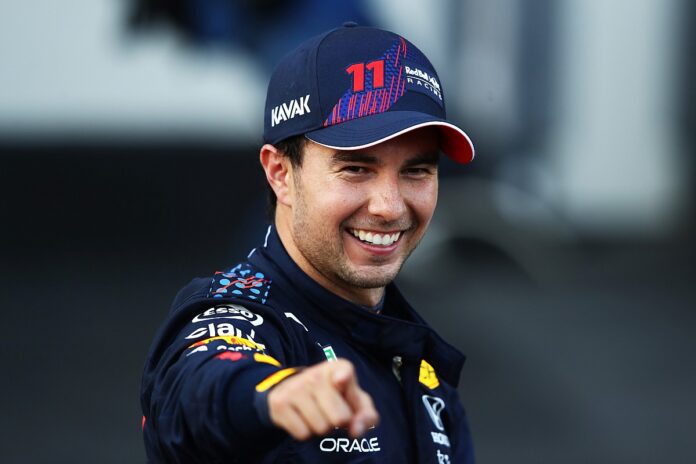 Sergio Perez is a Mexican racing driver who competes for Red Bull Racing in Formula One.

Sergio Pérez Mendoza was born on 26 January 1990. He is the youngest child of Antonio Pérez Garibay and Maril Mendoza de Pérez and was born in Guadalajara, Jalisco. He also has an older sister, Paola, and an older brother, Antonio, who is a retired stock car racer who competed in the NASCAR Mexico Series. Pérez is married to Carola Martnez, with whom he has two children. Pérez is a devout Roman Catholic.

Both Pérez brothers enjoy association football and have expressed an interest in leaving car racing to pursue a career in the sport. Javier Hernández, a Mexican international, is a friend of the brothers. Pérez revealed in a 2012 interview for the official Formula One website that if he hadn’t been a driver, he would have liked to be a lawyer.

Pérez established the Checo Pérez Foundation in November 2012 to help orphans and children with cancer. Paola, his sister, was the foundation’s president.

Perez has previously driven for Sauber, McLaren, Force India, and Racing Point in the past. At the 2020 Sakhir Grand Prix, he won his first Formula One Grand Prix, breaking the record of 190 starts before a race win.

Until 2012, Pérez was a member of the Ferrari Driver Academy. During the 2011 season, he made his Formula One debut for Sauber. With Sauber, he won his first Formula One podium at the 2012 Malaysian Grand Prix. He was dubbed “The Mexican Wunderkind” because of his young age and performance.

Pérez joined McLaren for the 2013 season, but the team did not finish on the podium. As a result, the team decided to replace Pérez with Kevin Magnussen for the 2014 season.

Force India signed Pérez to a €15 million contract for the 2014 season. He stayed with Force India after the team went bankrupt in 2018 and reformed as the Racing Point team in 2019. Racing Point signed a three-year extension with Pérez in 2019.

Racing Point announced in September 2020 that Pérez would be leaving the team at the end of the season, as Sebastian Vettel, a four-time F1 world champion, had been signed to replace him. Pérez then signed with Red Bull Racing for the 2021 season, taking over for Alex Albon.

Pérez then won the 2021 Azerbaijan Grand Prix with the team, his second Formula One Grand Prix victory.

Perez is married to  Carola Martinez. The couple married on June 3, 2018, after Perez proposed to his future wife on August 13, 2017. Because they both come from Christian families, they were overjoyed to have Pope Francis bless their marriage. Their nuptials took place three months and three days after her sister’s.

Sergio Perez Jr, the couple’s son, was born on December 21, 2017. Carlota was born on September 15, 2019, and they welcomed her into their family. Carola frequently brings her son to F1 races to support Perez Sr., and she will certainly bring young Carlota in the future.

“Why is Sergio Perez called Checo?” is one of the most frequently asked questions on the internet, and the answer isn’t all that complicated or interesting, as the Mexican driver himself explained in a 2013 interview. In response to the question, Perez stated, “Sergios are automatically given the nickname ‘Checo’ in Mexico, where I am from. There is no story behind it!”