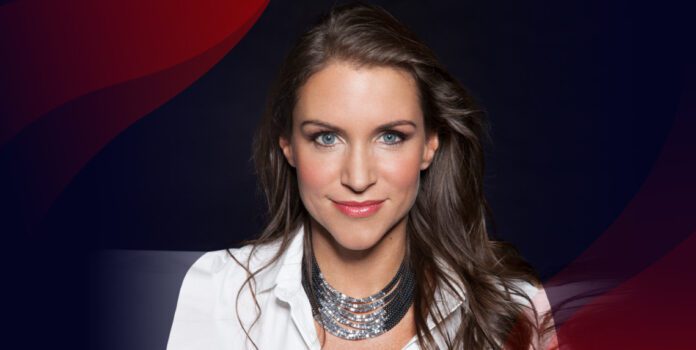 Stephanie McMahon is a businesswoman and former professional wrestler from the United States. She is WWE’s chief brand officer (CBO) and appears as a powerhouse on the Raw, NXT, and SmackDown brands.

Stephanie Marie McMahon was born in Hartford, Connecticut on September 24, 1976, to Linda and Vince McMahon. Shane McMahon is her only sibling. The family relocated to Greenwich, Connecticut, shortly after her birth. Throughout her elementary school years, she attended the selective Greenwich Country Day School.

McMahon first appeared in World Wrestling Federation (WWF) merchandise catalogues at the age of 13, modelling T-shirts and hats. She attended Boston University after graduating from Greenwich High School in 1994, where she earned a degree in Communications in 1998. She began working full-time for the WWF after graduating in 1998.

She formed a team called ‘The Alliance,’ which was defeated at the Survivor Series by ‘Team WWF,’ which included The Undertaker, Kane, Big Show, Chris Jericho, and The Rock. Shane and Stephanie were kicked out of WWF after the defeat.

Stephanie rejoined the WWF, now known as WWE, in July 2002. When she returned, she established the WWE Tag Team Championship title and signed Hulk Hogan to SmackDown, which irritated her father.

The first ‘Father-Daughter I Quit’ match took place in 2003. On the ringside, Stephanie was accompanied by her mother, while her father was accompanied by wrestler Sable. She lost the match, which resulted in her two-year absence from WWE.

She returned to WWE in 2005. She drugged Shawn Michaels backstage before the match in a March 2006 episode of Raw. That same year, she was named SmackDown’s general manager. She made an appearance on the season five finale of MTV’s ‘Punk’d’ on August 14, 2005.

On March 28, 2009, she appeared on Business News Network’s “The Market Morning Show” with her mother. She appeared in an episode of Food Network’s ‘Dinner: Impossible’ on November 11, 2009.

In November 2013, she became a WWE regular. She and her husband have ruled the company ever since. As a result, she made several bad decisions, claiming that they were “best for business.” Stephanie McMahon made an appearance on Raw on October 30, 2017, confronting general manager Kurt Angle. Stephanie was questioned about SmackDown’s attack on Raw, which she was not pleased with.

Stephanie McMahon made her WWF (now WWE) debut at Rowdy Roddy Piper’s Halloween party. In 1998, she began working full-time for WWF. She first worked as a model for WWF sales and merchandise before becoming an account executive in the WWF sales office in New York.

McMahon oversaw the creative process of all social and digital media properties, television and pay-per-view programmes, talent management and branding, live event booking, and marketing as executive vice president of creative writing in 2007.

She was named WWE’s chief brand officer in December 2013 and served as the company’s lead ambassador. She was now earning $775,000 per year for her corporate role and on-screen appearances. Stephanie also owned $77 million in WWE stock.

During their scripted romance, McMahon began dating Paul Levesque, better known as Triple H, in 2000. The couple got engaged on Valentine’s Day in 2003 and married on October 25, 2003, at St. Teresa of Avila Church in Sleepy Hollow, New York, in a Roman Catholic ceremony.

In a radio interview with Opie and Anthony in 2004, Levesque stated that he began dating McMahon after being separated from his previous girlfriend, Joanie “Chyna” Laurer, for a period of time, despite Laurer’s claims that their relationship began while they were still together. Stephanie adopted her husband’s surname and legally changed her middle name to McMahon after their marriage.

McMahon is a Republican who gave $2,700 to Chris Christie’s presidential campaign with her husband. Stephanie and her family are Irish-Americans, and she has stated that she is proud of her Irish heritage.

McMahon made a promo during a WWE live event in Dublin, Republic of Ireland in 2004 about her family’s origins in County Clare. Roderick James “Jess” McMahon, Stephanie’s great-grandfather, was born in New York City to Irish parents who had emigrated from Galway, Republic of Ireland, in the 1870s.