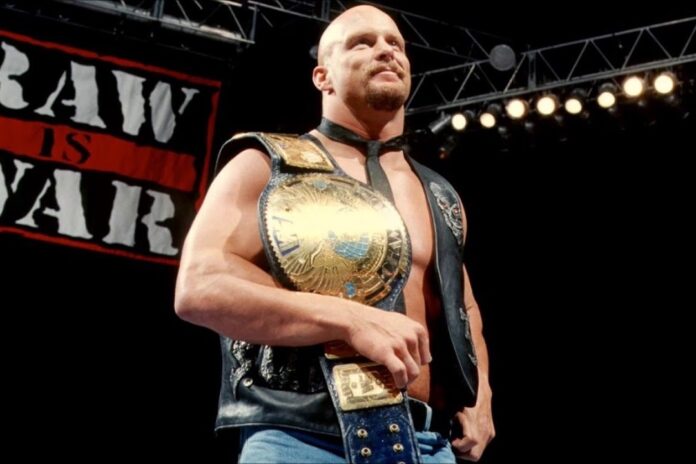 ‘Stone Cold’ Steve Austin is a WWE superstar from the 1990s who was a part of the ‘Attitude Era.’ He was inducted into the WWE Hall of Fame in 2009, well known for his Austin 3:16 tagline.

Before retiring in 2003, he was one of the most well-known WWE wrestlers, because of his Austin 3:16 slogan. After his pro wrestling career ended, Austin went on to star in several films and host several reality TV shows and podcasts.

Austin was born on December 18, 1964, in Austin, Texas, and raised in the small town of Edna, Texas. Scott, Kevin, Jeff, and Jennifer are his four siblings. He believes he “broke out of shyness when he found football” in junior high and eventually used athletics to help enhance his confidence.

He was a running back on the football team, a straight-A student, and a member of the National Honor Society while attending Edna High School. He recalls aspired to be a rock star but gave up because he couldn’t sing or play any musical instruments. Instead, he “fell in love with” wrestling, which “just resonated” with him one day while scrolling through the TV channels.

After high school, he attended Wharton County Junior College before receiving a full football scholarship to North Texas State University. While there, he quickly discovered he no longer enjoyed playing football and dropped out of college. He eventually got a job on a freight dock about 30 miles outside of Dallas, where he earned $400 per week.

In 1989, Austin began training at Chris Adams’ wrestling school in the Dallas Sportatorium after seeing a TV commercial. His wrestling career began with the United States Wrestling Association in the mid to late 1980s (USWA). He moved to Nashville and slept at the Congress Inn motel. He struggled to buy meals while earning only $15-$20 each night but regarded it as an opportunity to pay his dues.

He discovered there was already a wrestler named “Dr. Death” Steve Williams before his first match in Memphis. He was given 15 minutes to come up with a new name, which he landed on with the help of booker Dutch Mantell: “Stunning Steve Austin.” He was famed for donning red robes with sequins at the time. In 1990, he left USWA.

The next year, Jim Ross signed him to a guaranteed standard agreement with the WCW, which included a $75,000 pay. During his time in the WCW, Austin was also a member of the Hollywood Blonds tag team.

WWE CEO Vince McMahon hired him as the “Ringmaster” role in 1995, which Austin subsequently described as a “bad gimmick.” Austin sought a character change after six months of living in a log cabin on ten acres outside of Douglasville, Georgia. He claims that his then-wife brought him a cup of tea, advising him to take it “before it gets stone cold,” and instantly proposed that he adopt that identity. Austin made up a backstory about being from Victoria, Texas, then shaved his head and grew a goatee to “appear more menacing.”

Triple H had been chosen to win the 1996 King of the Ring pay-per-view tournament, but after breaking character during a curtain call at New York City’s Madison Square Garden, the league replaced him with Austin as punishment. At the June 1996 event, Austin defeated Jake “The Snake” Roberts to win the title, and he coined his catchphrase: “Austin 3:16 says I just whooped your ass.”

Austin had a damaged spinal cord during a bout with Owen Hart at Summer Slam 1997, which left him momentarily crippled.

McMahon launched the WWE’s edgier golden era, nicknamed the “Attitude Era,” in late 1997, with more violence, mayhem, sexuality, and overtly over-the-top, more reality-based tales. Austin had a reoccurring narrative pitting McMahon as his major antagonist for several years during this time, which became the pinnacle of his reputation.

When Austin discovered that the WWE had planned for him to lose a high-profile match against Brock Lesnar without explanation, he abruptly resigned his employment. After a few months, he reconciled with McMahon and returned to the ring. Austin took the difficult decision to retire from wrestling when his previous injuries began to take a major toll on him and his neurological system. On March 30, 2003, he chose Dwayne “The Rock” Johnson as his final opponent at Wrestle Mania XIX in Seattle.

Austin returned to California after a three-year sabbatical, during which he claims he took to heavy drinking, with the intention of launching an acting career. He made his feature film debut alongside Adam Sandler in 2005’s The Longest Yard, followed by 2007’s The Condemned and 2010’s The Expendables. According to Austin, he rapidly realised he “didn’t really want to” act.

He eventually claims to have found his “niche” in hosting, reality TV, and podcasting, including a WWE Network interview segment known as the Broken Skull Sessions.

He is also the fifth-ever WWE Triple Crown Champion, the 1996 WWF King of the Ring tournament winner, and a record three-time Royal Rumble winner.

Austin has appeared as the main attraction at several WWE pay-per-view events, including three WrestleManias. In 2009, he was inducted into the WWE Hall of Fame.

Austin has four kids, Stephanie, Cassidy, Jade, Loren and has been married several times. He acknowledges that his dedication to his wrestling profession took precedence over parenthood, resulting in a rocky connection with his children. He continues, “They knew I loved them, but I wasn’t there.

“Now that they are older, we are on our way to better relationships. As a result, they are now pursuing their own interests. I am there for them, and if I can provide them with any guidance, I will. We’re finally chatting after all of this nonsense. The relationships, as difficult as they were, are better now, but it’s still a stepping stone because, after all these years, we still don’t know each other as well as we should.”

Read more: Stone Cold Steve Austin net worth: How much is the retired WWE champion worth in 2021?