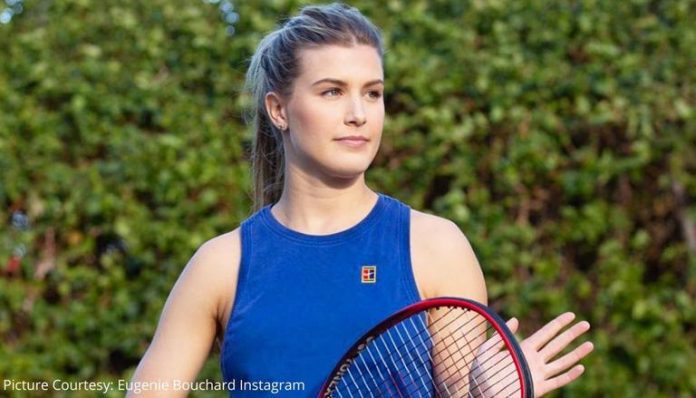 Former world no. 5 Eugenie Bouchard has yet to declare a return date to the WTA tour after undergoing right-shoulder surgery in June.

During her recovery, the Canadian managed to wear the role of commentator by teaming up with Tennis Channel to express her thoughts on the US Open hard-court swing.

Bouchard is a frequent user of social media and keeps her followers up to date on anything tennis-related. A fan recently commented on how boring tennis was without Eugenie Bouchard.

The Canadian responded to the tweet saying, “be back soon!”.

The Canadian, a previous runner-up at the Wimbledon Championships, has had a roller-coaster career, with a succession of ailments hurting her game on a regular basis.

Bouchard revealed that she has had trouble in her right shoulder since 2020, and that the injury she sustained at the WTA Monterrey earlier this year aggravated the condition.

After defeating Ana Ivanovic in the quarterfinals of the 2014 Australian Open, the Canadian began her meteoric journey to fame. In the semi-finals, she was defeated by Li Na.

Eugenie Bouchard had a great Wimbledon run the same year but was defeated in the final by Petra Kvitova. Her most recent triumph came in 2019 at the WTA Auckland Open, where she teamed up with emerging American tennis player Sofia Kenin.

Bouchard began her career with a bang, but she has battled to find top speed in recent years, and injuries have just added to the fire. The Canadian is an aggressive baseliner who has the ability to beat top-tier opponents.

Given her current state of recovery, Eugenie Bouchard is expected to return to the WTA tour by next year, where she may attempt to win minor championships before attempting to win majors.

Federer expects a new player to break his record of 20...