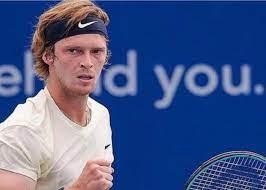 When it comes to commanding a particular surface, Rafael Nadal of Spain has been one of the most dominant players. By far the most superior player to compete on clay is the former World No. 1 player. It is not easy to win 13 French Open titles on a regular basis.

Rafael Nadal has been unable to play tennis recently owing to a foot issue. As a result, he has been forced to sit out many tournaments.

He has lost points in the current season due to his inability to play in those tournaments, as he had numerous points to defend.

Dominic Thiem, who has been out due to a wrist injury, is another player who has had a same destiny as Rafa.

As a result, players are taking advantage of the situation and leapfrogging them in the rankings.

Andrey Rublev is one of these players. He spoke about being World No. 5 and the recent progress.

“My place as world number 5? I’m a little lucky. It’s true that I had a good season, surely my best,” he said as per reports on TennisHead.

“But I took advantage of the fact that Rafael Nadal doesn’t play a lot of tournaments. Dominic Thiem was also injured.

“Both have lost a lot of points in the standings. I passed them but I was a bit lucky.”

The 23-year-old player reflected on his good season this year, calling it his finest to date. He does agree, though, that it would not have been feasible if Rafa and Dominic were still competing.

He is currently participating in the Indian Wells Masters. He defeated Carlos Taberner in straight sets in the first round. He’ll face Tommy Paul of the United States in the following match.

Read More: Medvedev, Tsitsipas, Rublev and others celebrate after winning the Laver Cup

Rafael Nadal injury not as bad as initial reports