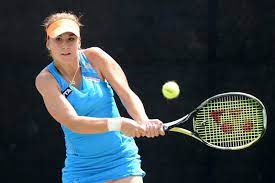 Belinda Bencic, a Swiss tennis player, says the right knee injury that forced her to withdraw last week in Chicago was not serious because she avoided ligament damage.

Bencic, ranked No. 10 in the world, advanced to the Chicago quarterfinals before being forced to retire against Elena Rybakina in the second set.

When Bencic decided she couldn’t go on, Rybakina was ahead 6-4 3-1. Bencic had a strong start to the match, taking the first break in the fifth game to take a 3-2 lead.

Rybakina came back with a bang, breaking Bencic in the eighth and tenth games to come back and win the opening.

Bencic decided to withdraw after serving out the fourth game of the second set to cut the deficit to 3-1.

“It’s great for tennis. I just really hope that everyone will protect them & hope the best for them & not put so much pressure & hype around them so it just gets too much.

“I just hope everyone will really hope the best for them so they develop in peace,” Bencic said.

Raducanu won the US Open as a qualifier by defeating Bencic.

“Yeah, you know, I’m so pleased to have come through that.

“Belinda is such a great opponent and she’s an Olympic gold medallist, which is probably one of the biggest events in sport,” Emma Raducanu said.

“She’s a great player, and I knew it’s going to be an extremely difficult match.

“It took me some adjusting at the beginning to get used to her ball speed, yeah, how aggressive she was. Once I adjusted, I settled in. I didn’t overpress as much.

“Yeah, I found a way to win, but it was very difficult to play against someone at such a high level.”

Kyrgios set to go for surgery in an attempt to rescue...