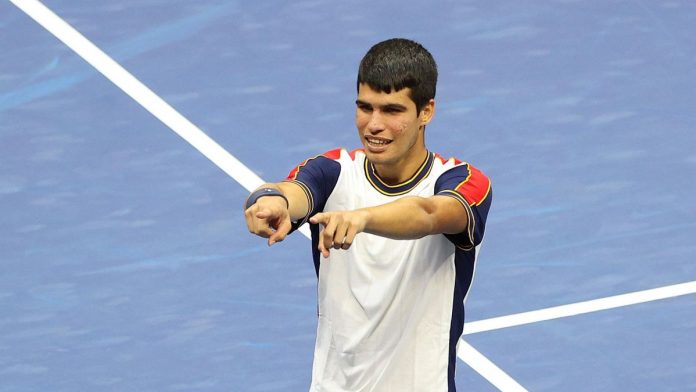 Carlos Alcaraz recently made history at the US Open 2021. The Spaniard moved to the fourth round of the Grand Slam by defeating World No. 3 Stefanos Tsitsipas in a five-set marathon.

Interestingly, despite the fact that the game lasted more than four hours, he maintained his composure and performed admirably under duress.

Real Madrid CF, a Spanish football giant, tweeted a special message for Carlos Alcaraz in honour of his outstanding performance. The club expressed their pride in him as he accomplished an incredible performance at the US Open 2021.

The club’s official Twitter handle tweeted, “We are all proud of a great Madrid player like you, who has already made tennis history by being the youngest to reach the second round of this tournament since 1989.”

“A lot of strength and a lot of courage, Carlos Alcaraz, for your match today in the eighth of US Open,” further added the club.

Following matches for Alcaraz in the US Open 2021

Alcaraz has advanced to the fourth round of the US Open 2021 for the first time since 1989. It is a special moment for the club, which has been the most successful football team in the region because he is from Madrid.

In the pre-quarterfinals of the US Open 2021, Carlos Alcaraz will not face Germany’s Peter Gojowczyk one-on-one. Today’s contest will be held in the Grandstand Arena. Before the game, the youngster was also wished well by the same Football club.

Carlos Alcaraz faces Peter Gojowczyk in the US Open 2021, and fans have high expectations for the following match.

Read More: Roger Federer net worth: How much does the tennis superstar earn and where does he invest?

Rafael Nadal withdraws from US Open due to injury