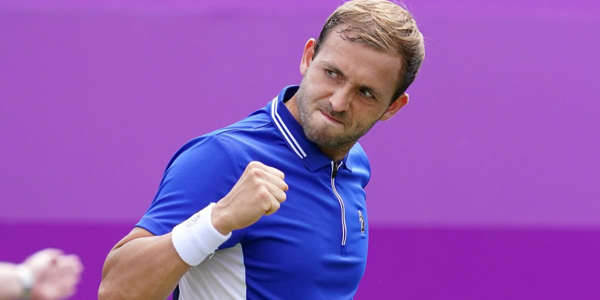 Dan Evans defeated Kevin Anderson of South Africa in a tight first-round two-setter with only one break of serve; Evans will face Cameron Norrie in an all-British last 16 matches, with Norrie having upset German Dominik Koepfer in straight sets the day before.

After a marathon first set tie-break, Evans, the eighth seed, defeated Kevin Anderson, a 35-year-old former Wimbledon champion who was a lucky loser in qualifying, 7-6 (13-11) 7-5 in two hours and 18 minutes.

“It was a tough tie-break, I think I was a little fortunate to come through that one and the first set,” Evans told the ATP.

“But I played a good, solid second set and hung in pretty well. I was pretty happy with that.”

Anderson, who reached the Wimbledon final in 2018 and the US Open final in 2017, dominated his 31-year-old opponent with 13 aces to Evans’ five.

In the tiebreaker, both players had a few chances to close out the opening set. Anderson led 6-5, 7-6, and 11-10 in the second set, but Evans fought himself out of a hole and won the set by converting his own fourth set point.

Evans, who is ranked 22nd, has only played Norrie, who is ranked 28, once on the ATP main tour, in the first round of this year’s Australian Open, which Norrie won in four sets. He defeated Norrie in a series tournament in Aptos, California, in 2016.

With a straight-set triumph over American Brandon Nakashima, top seed Andrey Rublev advanced to the quarter-finals.

The Russian world No. 5 defeated the American wild card 6-2 6-1 in 62 minutes to set up a match with Argentinian sixth seed Diego Schwartzman, who rallied to defeat South African Lloyd Harris 4-6 6-3 6-2.

Raducanu believes women’s tennis is now as competitive as ever