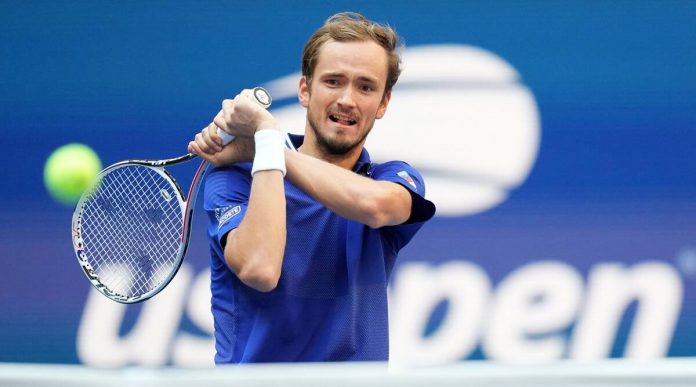 Daniil Medvedev produced a stunning performance to win the US Open, and the Russian has given his reaction to Eurosport.

Novak Djokovic’s dream of a 21st major title and the calendar Grand Slam faded away as Daniil Medvedev upped his game to such a level that the Serb was unable to win a single set.

Medvedev has given his reaction to Eurosport.

Medvedev was totally dominant as he cruised to a 6-4, 6-4, 6-4 victory in front of a noisy Arthur Ashe Stadium crowd, while Djokovic was unable to follow up his championship conquests at the Australian Open, Roland Garros, and Wimbledon earlier this year.

The Serb was obviously sad both at the end of the match and when thanking the supporters in his post-match address as the adoring audience gave him a warm round of applause.

But, nothing should be taken away from Medvedev. The number two seed maintained his cool and unstoppable level of play to win his maiden Grand Slam championship and join Marat Safin as the only Russian men’s singles champion in New York.

Both the players express their gratitude

New US Open champion Daniil Medvedev spoke with Eurosport’s Mats Wilander after the match about his feelings and how he overcame Djokovic and some late cramping to win on the grandest platform.

“I am just super happy, because when I play against these guys, I’ve lost two finals. When I had Novak again, I was scared in a way because I thought if he destroys me one more time it will bring my confidence down. I’m really happy to win.

“The funny thing about Novak is with many players you need a plan in your head. With Novak, you need 15 because every game I’ve played with him, either that I’ve won or lost, was different. He was nervous, I was nervous – that’s tennis.

“I love my, we can call it Russian style, when I don’t celebrate too many victories. I try not to show too many emotions because it actually helps me. If I showed a lot of emotions there would be a lot of bad ones also.”

“First of all, sorry for you the fans and Novak,” Medvedev said in his winning speech.

“To me you are the greatest tennis player in history.” pic.twitter.com/DZMH7MDr4N

In his address, Djokovic paid gratitude to both Medvedev and the fans.  “I was thinking in both scenarios, visualising myself standing here in front of you guys and what would I say.

“Thank you so much, guys. Congratulations to Daniil. Amazing match, amazing tournament. If there is anyone that deserves a Grand Slam title right now it is you, so well done.

“To your team, you have an amazing team, you are one of the greatest guys on the tour, we get along very well. I wish you many more Grand Slams, many more majors to follow, and I am sure you will be on this stage again in the future.”

All the feels from @DjokerNole to the fans in New York. pic.twitter.com/PnEHevMVKk

Why does Daniil Medvedev claim that Chinese fans like Roger Federer...