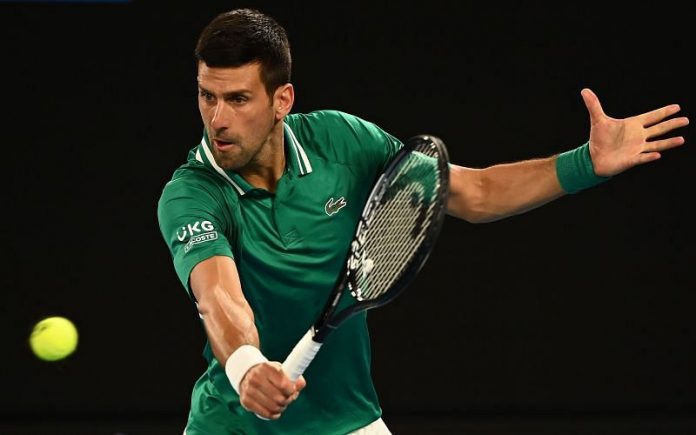 Despite not competing in many tournaments this season, Novak Djokovic has been a force to be reckoned with, winning 27 of his 28 Major matches.

Novak had a one-of-a-kind opportunity to win the coveted calendar Grand Slam by winning the first three Majors and reaching the US Open final.

Despite this, the Serb crumbled under pressure and lost 6-4, 6-4, 6-4 to Daniil Medvedev, missing out on the 21st Major championship and missing 50 days on the court.

Novak skipped Indian Wells in favour of Paris, Turin, and the Davis Cup Finals, keen to put the New York disappointment behind him and pursue the year-end No. 1 spot and a significant team title for his country.

Djokovic got off to a winning start in Paris with a 6-2, 4-6, 6-3 triumph over Marton Fucsovics in under two hours, his first match in 50 days.

The world number one lost the second set, but despite the lack of competitive matches recently, he played well, finishing with 24 winners and 23 unforced errors.

The five-time champion was happy with his performance, which included establishing his groove and outlasting a tenacious competitor who gave it his all to stay in the race.

Novak took the lead in game two of the opener with an early break and a 4-1 lead following an unreturned service.

At 5-2, the Serb got another break to seal the opener and give himself a boost.

Djokovic is happy with his performance after the break

In the second set’s second game, Fucsovics fended off a break opportunity, broke Djokovic in the next game, and held at love to go up 3-1.

With a backhand crosscourt winner in the eighth game and a service winner at 5-4, the Hungarian extended his prospects of a comeback. Novak maintained his composure at 0-30 in the third set’s third game to close off the match with a victory and avert a scare.

In the second one, he broke Marton at love before the Hungarian fought back to prolong the battle. Djokovic broke for the fourth time in the sixth game and held with a service winner in the next to take a 5-2 lead.

In game eight, Fucsovics saved a match point before Djokovic completed the victory with a forehand drive-volley winner on his serve to go to the third round.

“It was great to be back on the court after almost two months without competition.

“I did not expect anything, but I knew this was not going to be an easy match. Marton is a very talented player; he has a lot of quality.

“It was a great fight. I could not break his serve, he was playing with a lot of precision, and we pushed each other to the limit, Djokovic said as per reports on Tennis Head.

“It was a great opening match for me, and I’m very pleased. It’s just about spending time on the court, finding that match play intensity and playing more points.

“The more matches I play, I think I’m going to get better.

“I know myself well, I was in this situation before quite a lot of times, so hopefully, the experience can play a role in doing the job well,” Novak Djokovic said.