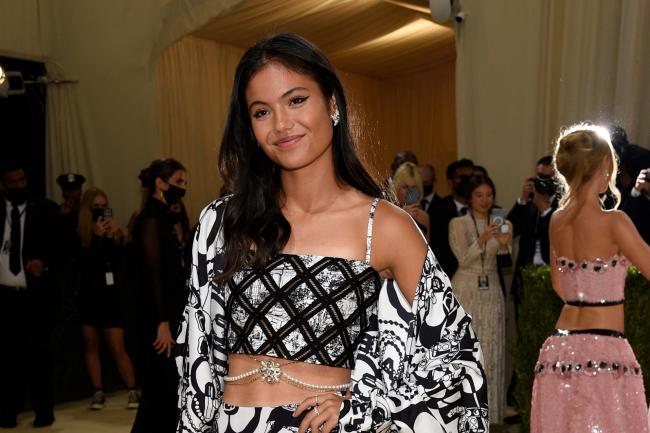 Raducanu arrived at the event in a black and white printed silk twill crop top, skirt and cape from the Chanel Cruise 2021/22 collection.

She undoubtedly looked stunning at the event. But the fact that she chose to go with this attire does raise the question about whether she will be the new face of Chanel.

Meanwhile, Vogue doyenne Anna Wintour has been a huge tennis fan and Raducanu can be seen in October’s British Vogue Issue.

Raducanu, whose parents couldn’t come to see her compete due to the pandemic restrictions, shared a photo of herself posing in front of a large billboard of herself on Monday, writing: “Sightseeing in NY, never thought I would see this… coolest thing.”

Raducanu to become a billion-dollar girl

Raducanu, who finished her college examinations earlier this summer, is set to become a “billion-dollar girl,” according to publicist Mark Borkowski, and sign endorsement deals as a result of her historic victory.

“I think Emma will earn well over $100 million [in the next calendar year]. She’ll eclipse all the men,” said Jonathan Shalit, head of InterTalent Group, a talent management firm based in London.

Raducanu will be joined by many athletes, including Olympians Suni Lee and Allyson Felix, as well as Formula One champion Lewis Hamilton, who has purchased a table at the Gala and invited black athletes.

Wintour and her pregnant daughter Bee Shaffer were in the stands at Flushing Meadows on Sunday to see Russia’s Daniil Medvedev defeat Novak Djokovic.

Read More: Emma Raducanu’s dominance in the US Open 2021

Roger Federer net worth: How much does the tennis maestro earn...

Tsitsipas blames social media for impacting his mental health – “It...