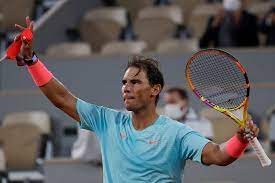 Rafael Nadal, a 20-time major champion and former world number one, has drawn many admirers to his game and transformed them into his supporters for nearly two decades.

As he prepares to return to the ATP tour next year, admiration for the Spaniard grows with each passing year.

Following a tough semi-final loss to Novak Djokovic, the Spaniard decided to miss the grass-court season for his treatement.

Rafael Nadal is recovering from a foot injury

Despite making his comeback on US hard courts, Nadal’s run was cut short and disappointing. He was defeated by Lloyd Harris at the Citi Open in Washington. Nadal ended his 2021 season after this defeat and returned home for the treatment of his foot injury.

Rafael Nadal is expected to make a comeback at the Australian Open next year. If not at the ATP Cup, now that he is recovering and may return to the courts shortly.

Nadal, who is not a frequent user of social media, recently got a heartfelt message from one of his most ardent supporters. In the video, as reported on Marca, an 89-year-old Nadal fan is shown waiting for the Spaniard to greet him on his 90th birthday.

Rafael Nadal’s game is the best he has ever seen in men’s tennis, according to a video filmed by his granddaughter.

The grandfather also laments the fact that he will no longer be able to see the Spaniard live. But a birthday wish would make up for it.

The 20-time major champion received a similar request from a grandson on Twitter earlier this year at the Madrid Open.

Carlos Carrizosa, who took his grandmother to see Nadal in person, wrote about his grandmother’s Alzheimer’s disease. He mentioned how she would like to meet the Spaniard before she forgets everything.

Nadal met the 93-year-old Manuela after his quarter-final triumph in Madrid. Just like Manuela, let’s hope Nadal grants his 89-year-old fan’s wish by sending him best wishes for his 90th birthday.

Read More: Lopez hopes Nadal and Federer return for Madrid Open – “Will have all the best available”

Gaudio reacts to his removal as captain of the Argentine Davis...