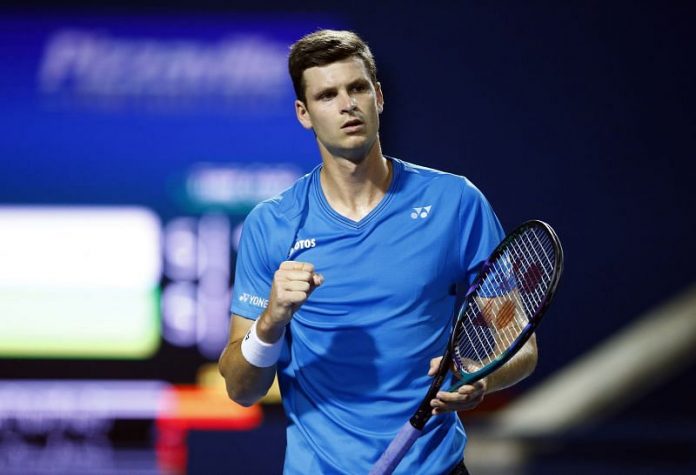 Hubert Hurkacz, a Polish tennis player who has been one of the most improved players on the ATP tour this year, won yet another tour championship at the ATP Moselle Open finals, defeating Pablo Carreno Busta in straight sets.

Before capturing his third victory of the year, Hurkacz had to beat Andy Murray, Lucas Pouille, and others. In addition, the Pole reached his first-ever semi-finals at a major after upsetting former world number one Roger Federer in the Wimbledon quarter-finals.

Along with the win, Hurkacz managed to bagel Federer on Center Court, which was a first in Federer’s great Wimbledon history. Hurkacz also achieved a career-high ranking of no. 11 as a result of his triumph.

Despite the absence of prominent players such as Novak Djokovic and Rafael Nadal, Hurkacz established his worth with back-to-back triumphs over top-10 opponents.

After securing the victory in the final at the Moselle Open, the Polish star joined an exclusive group of players. Hurkacz is the fifth player to win three or more ATP titles this year, joining Djokovic, Medvedev, Ruud, and Zverev.

Players with three or more ATP titles in 2021…

So far this year, all of the players on the list have put in outstanding performances. Even a young talent like Casper Ruud managed to win four tour-level titles while Djokovic was in incredible form until the US Open (Geneva, Stockholm, Gstaad, and Austrian Open).

Ruud has now ranked tenth in the latest ATP singles rankings thanks to these four titles. He’s been putting forth solid results on tour alongside Hurkacz, and the combination is more than capable of breaking through in the coming years.

When it comes to Djokovic and Medvedev, the Serb has won three major titles this year and is on the verge of winning his fourth. But Medvedev, who won his first major title in New York, ended his incredible run.

Apart from the three majors, Djokovic has won more ATP titles to his name, which he won on home soil (Belgrade-2). In comparison to Djokovic, the Russian started the year slowly but ramped up the pace during the European clay season.

Before winning the US Open, Medvedev won events in Mallorca and Montreal. The world No. 2 won the indoor hard-court event in Marseille earlier this year.

With players like Daniil Medvedev and Stefanos Tsitsipas moving up big in majors this year, guys like Hubert Hurkacz, Casper Ruud, Jannik Sinner, and others will be motivated to take the next step and deliver their best tennis at slams next year.