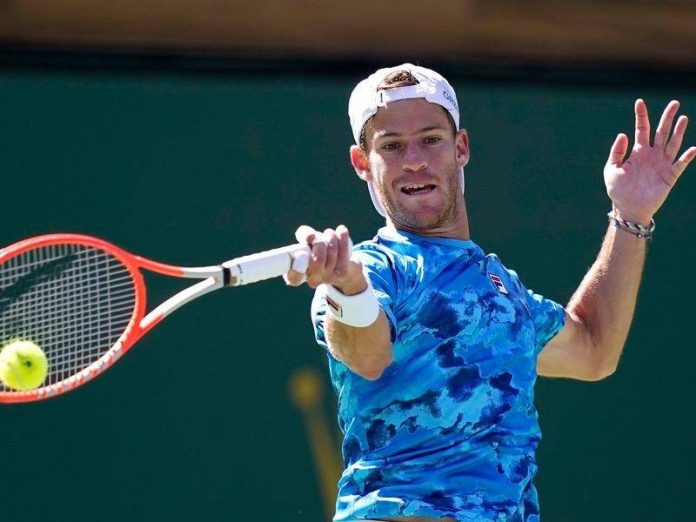 Diego Schwartzman, an Argentine tennis player, is currently competing in the Vienna Open 2021. He earned a spot in the pre-quarterfinals against French tennis star Gael Monfils after winning his opening-round match.

Despite the fact that Argentina won the match 7-6(5), 4-6, 6-2, there were numerous incidents during the play.

The equipment that replaces the line judges failed during the early stages of the match between Diego Schwartzman and Gael Monfils, resulting in a system failure.

The Argentine player’s momentum was delayed as a result of this. However, an incident involving Diego and Gael’s coach, Gunter Bresnik, drew notice.

Schwartzman lost his temper when he saw the Frenchman’s coach was trying to nudge him by staring him down. The 29-year-old player was not pleased with this.

“He is so stupid. He doesn’t stop looking at me,” he said.

Schwartzman is completely pissed off with Bresnik.

“He is so stupid. He doesn’t stop looking at me”.

He also went ahead and confronted him.

“I have confidence with Bresnik so I asked him why he is clapping me and saying ‘bravo’ to my face. I don’t want a discussion.”

Schwartzman explaining the situation to Bernardes. “I have confidence with Bresnik so I asked him why he is clapping me and saying ‘bravo’ to my face. I don’t want a discussion”.

Fans were thrilled with Gael Monfils and Diego Schwartzman

Regardless, the match between these two outstanding athletes was fascinating.

As the match began, both players appeared to be in fine shape. Finally, the first set had to be determined in a tiebreaker, which went in favour of the Argentine.

Gael found a way to boost his levels in the following set, winning the set and sending the match to a deciding set. Diego, on the other hand, regained his calm and won the set with ease in the end.

When Schwartzman takes on American star Frances Tiafoe in the quarterfinals, it will be a fascinating battle.

Read More: Diego Schwartzman reflects on shocking Davis Cup defeat to rookie – “Sorry to those who believed in me”

Medvedev not keen to discuss his medical problems – “It’s a...