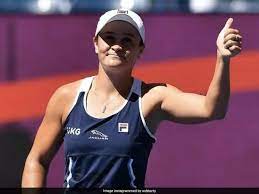 Carla Suarez Navarro of Spain is pleased with how her final season on the Tour has progressed so far, and she is looking forward to wrapping off her career at the Billie Jean King Cup.

“It is the final season that I wanted,” Suarez Navarro told the Billie Jean King Cup website.

“I have had a really good year, much better than I could have imagined. I have felt the love of the people in every tournament, on every centre court and from the other players also.

“For me, it was so difficult at the beginning of this year and last year as I was fighting, but now I am feeling really good.

“It has been a great goodbye to the year, to tournaments, to the calendar and to the fans.

“I have really appreciated everything, and I am happy to be here for the last time. It is so special that after a lot of years the Billie Jean King Cup Finals is my last tournament.

“I am always proud to represent Spain. I will try to enjoy every day and all the times I am on court. I want to have fun with my team.

“The things you feel on court with your team behind you, when you represent your country, is always so special.”

Suarez Navarro was excited to play against Ashleigh Barty

In the first round of Wimbledon, Suarez Navarro took eventual champion Barty to three sets.

“There are so many special moments from 2021 but I really enjoyed that match,” she added.

“The atmosphere on Centre Court, against Ash Barty – the world No. 1, was so special for me. It was a lovely gift”

Suarez Navarro will never forget a match she played at the start of her career.

“If I have to choose one, maybe I would choose Roland Garros in 2008,” she said.

“I navigated the qualifiers and in my first Roland Garros I played on Centre Court for the first time against Amelie Mauresmo, a local player.

“The atmosphere was amazing. I made the quarter-finals and this Roland Garros was the first time that people started to know me and started to know how I play. It was one of the best moments”.

Maria Sakkari has the potential to break into Top-10, says coach...