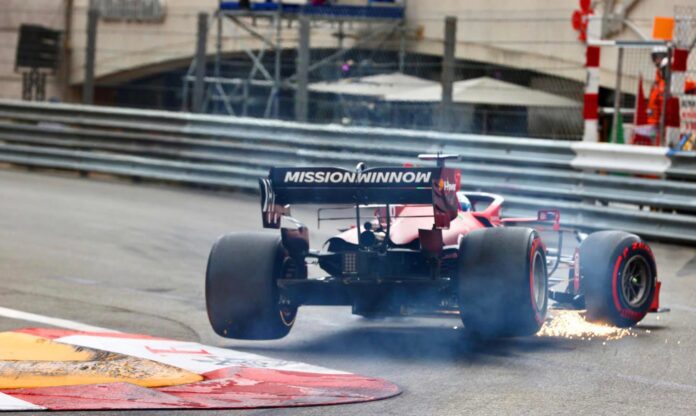 After Ferrari‘s bittersweet performance at the Monaco Grand Prix, Sky F1 pundit Martin Brundle has revealed that there will be ‘tense meetings’ within the outfit.

Ferrari were clocking respectable positions on the timesheets all weekend in Monaco. Carlos Sainz even managed to secure a second-place podium finish which was his first podium in Scuderia red.

However, his teammate Charles Leclerc saw the other end of the spectrum with a disappointing exit from the race.

Leclerc had managed to claim pole position for his home Grand Prix but ended up crashing into the barriers on the exit of the Swimming Pool.

The timing of the crash was such that no one was able to claim his top spot which sealed his pole finish.

On one hand, there were celebrations on the pole finish, but there were also concerns regarding his gearbox. If the part had sustained damage, a replacement would result in a grid penalty.

While Ferrari gave the all-clear for the gearbox, Leclerc noticed problems with the car on his way to the grid on Sunday.

This led to the end of his race as he was forced to watch from the sidelines.

It was confirmed that the problem was related to the left driveshaft.

According to Brundle, this incident will lead to some tense debriefings and investigations to understand if the car was thoroughly checked before the race.

“This was a chance for the young Monegasque to win his home Grand Prix in a Ferrari on the very roads he used to take the bus to school,” Brundle wrote in his Sky F1 column.

“He would have been thoroughly hurting on Monday morning especially as he can never know if and when such a chance will materialize again.

“Much of the Ferrari hierarchy were in attendance as Leclerc’s car failed on his out lap to the grid, and there will be tense meetings this week as to the decision-making process and how the problem was missed pre-race.

“Almost always when a car hits the barriers reasonably hard, especially at a 90-degree angle across the rear axle, it needs a new transmission and the resultant five-place grid drop.

“Ferrari rolled the dice by not changing all the drivetrain and lost. It appears that something on the left-hand side had also been damaged in the heavy right-side contact.”

While Leclerc’s side of the garage was gloomy, Brundle was impressed with Sainz’s performance.

He continued: “Carlos Sainz carried all the expectations of Ferrari on his shoulders and delivered a very mature second place nine seconds behind Verstappen despite some tyre graining issues.

“The young Spaniard was on form throughout and deserved this glory even though he felt it was a wasted opportunity for pole position and victory. I like that mentality,” he concluded.

Ferrari to gamble on Turkish GP for engine update, ready to...

“You choose your battles”: Verstappen charts out title challenge against Hamilton...