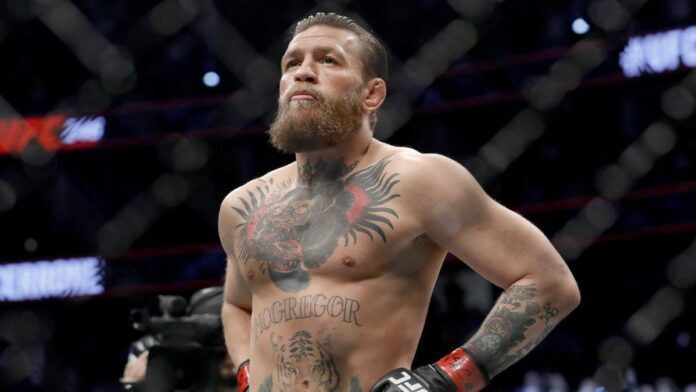 MMA superstar Conor McGregor has named his most effective technique on martial arts.

McGregor, who most recently lost to Dustin Poirier via technical knockout, took to Twitter to engage in a Q&A with his fans and followers. One user asked the Notorious One to name his most effective technique in martial arts. McGregor took note of the question, and answered the fan’s query.

In his tweet sent as a reply to the user, McGregor said, “The art of ambush. It is what the McGregor clan where known/feared most for. Ambush! Our motto is ‘ard choile’ which means ‘to the high wood.’

The art of ambush. It is what the McGregor clan where known/feared most for. Ambush! Our motto is “ard choile” which means “to the high wood”. It is where we came down from from, the high woods, and where we returned to when the enemy was no more. Outnumbered but never outsmarted https://t.co/s98EKlfZTQ

“It is where we came down from, the high woods, and where we returned to when the enemy was no more. Outnumbered but never outsmarted.”

Those in the know will be aware of what McGregor is talking about. Back in April 2018, McGregor and his cronies and accomplices invaded UFC 223, which was held in Brooklyn, New York.

He threw a dolly through an open bus window, and his actions caused injuries to UFC competitors Ray Borg and Michael Chiesa.

McGregor is far from the nicest guy in mixed martial arts, and has orchestrated quite a few despicable actions. After his TKO doctor stoppage loss to fierce rival Poirier at UFC 264 this year, he went on another shameful rant.

He called Poirier out, and told him his partner was in his DMs. The Irishman said this while he was wincing in pain after suffering a broken leg at the end of the first round.

The former UFC titleholder has lost to Poirier before, making the aforementioned loss his second consecutive loss to Dustin. His last win came when he beat Donald Cerrone via first-round head kick and punches in 2020.

Khabib Nurmagomedov lashes out at reporter – “Never ask about weight...