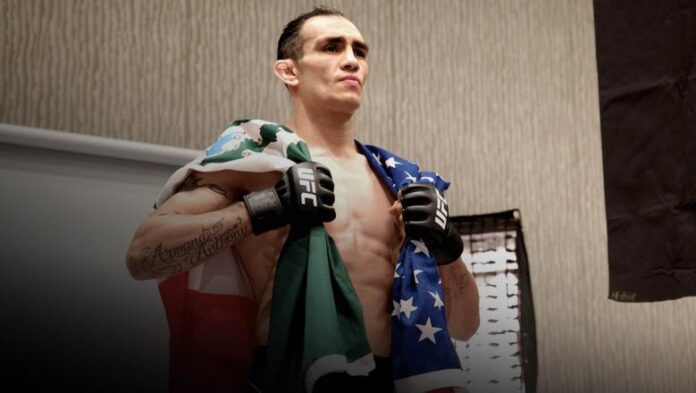 Tony Ferguson is a professional MMA fighter from the United States. tony

Anthony Armand Ferguson Padilla was born on February 12, 1984, in Oxnard, California, but grew up primarily in Muskegon, Michigan. He is of Mexican descent. Ferguson is his Scottish-American stepfather’s surname.

Ferguson participated in three sports at Muskegon Catholic Central High School: American football, baseball, and wrestling. He started defensive back for the Class 8 state football champions in 2000 and was a three-time All-State wrestler, winning the 152-pound division in 2002.

Ferguson attended Central Michigan University after high school before transferring to Grand Valley State University. He also attended Muskegon Community College. He did not finish his degree, but he did have a great collegiate wrestling career, earning the National Collegiate Wrestling Association national wrestling championship in the 165-pound division in 2006.

Ferguson returned to California after college to be closer to his extended family, working in marketing and sales during the day and bartending at night. A patron saw Ferguson’s cauliflower ear while working a bar shift one night and began up a conversation about his wrestling past. The patron worked as a trainer at a local MMA gym and was invited to help with some young MMA fighters on their wrestling. He soon chose to pursue a professional mixed martial arts (MMA) career.

Ferguson returned to lightweight after his debut and faced Aaron Riley on September 24, 2011, at UFC 135. The bout was stopped after the first round when Riley claimed he had a broken jaw, giving Ferguson a TKO victory.

Ferguson returned to the ring on October 19, 2013, at UFC 166, after taking almost a year out to recover from an arm injury sustained in his previous fight. In the first round, he won via D’Arce choke submission. The victory also earned him his first Submission of the Night honour.

Ferguson and his wife, Cristina Ferguson, have a son, Armand Anthony.

Ferguson is known as one of MMA’s most outlandish characters. He built his own specialised training apparatus at his home in Big Bear Lake, California, and publishes videos of his unique exercises on his personal Instagram page on a daily basis.

Smacking his arms and legs against metal poles to increase bone strength, tossing baseballs off a pitcher’s mound to build power for right-hand punches, swinging a hammer while balanced on a gym ball, and somersault jumps over tall stacks of gym mats are among his exercises.

Fellow fighters have frequently commented on Ferguson’s unconventional practises, and some, like Belal Muhammad, have even imitated Ferguson’s training films on their own personal social media profiles. Ferguson has stated on Twitter that he avoids sparring in training because he “finds it limits his creativity” when fighting.

During the buildup to his fight with Charles Oliveira at UFC 256, ‘El Cucuy’ made a dig at McGregor and Paradigm Sports Management.

El Cucuy claimed that McGregor and Paradigm Sports Management owe him $500,000 because they refused to schedule a fight between him and the ‘Notorious’ when they both appeared under the same banner. Ferguson also stated that the management team used to prioritise McGregor and manipulated the system with UFC for financial gain.

Ferguson was irritated after the negotiations fell through and he was denied the opportunity to fight Poirier. It was an opportunity for him to make a run for the title. Not only did McGregor take shots at Khabib and Poirier, but ‘El Cucuy’ did as well.

He continued, “It’s not happening. I’ve been at this company for a very, very long time and it’s happened once before with Conor. It’s not happening. There’s no management to do bad business behind my back anymore with Paradigm Sports Management.”

Cristina Ferguson filed a restraining order against Ferguson in March 2019, stating atypical conduct such as severe paranoia, not sleeping for days, pulling apart their home fireplace, and believing that a tracking chip was implanted into his leg during reconstructive knee surgery.