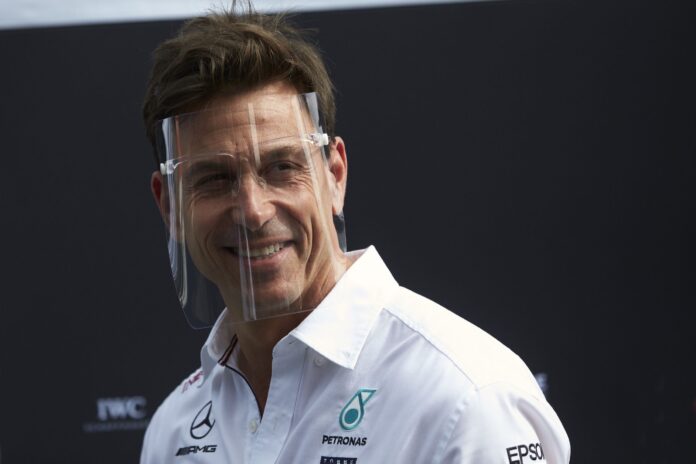 Mercedes had a phenomenal performance last season with no other team in sight to counter its dominance.

Under the leadership of Toto Wolff, the Silver Arrows also produced one of the most prominent car of all time – the W11.

Despite everything going well for the outfit, Wolff was considering retiring from the world of Formula 1 and returning to finance.

In an interview, Wolff was asked if he ever thought of leaving Formula 1 to which he replied that he has often thought of the same.

“Often,” he said. “Last year I was really beating myself up to come to a decision of whether I wanted to go back in finance and have a hedge fund or continue with my private investment company or stay in motor racing.

“In the end, motor racing won.”

The Mercedes team boss revealed that his team’s almost perfect score led him to consider continuing in the sport.

“I think it’s the sheer fact that the stopwatch never lies, you always have a benchmark,” he explained.

“There are new challenges that are coming and that continue to develop the organization and the team into the next generation,” he continued.

‘We are a sports franchise’

“It’s about diversifying the business while not distracting from racing – as a company we are growing at a tremendous rate,” he stated.

“So it is a fact that we are a sports franchise,” he added.

“Only ten exist in a spectacular global sport, and with an enterprise that is Mercedes, that’s going to generate $550-600 million in revenue.

“We are not a small company anymore. But still, it all comes down to the lap time, always down to the stopwatch,” he said.

Towards the end of his contract, Wolff had plans to apply for the position of F1 CEO which was available after the departure of Chase Carey.

However, Stefano Domenicali took the spot and Wolff went on to score a better position with Mercedes where he was awarded a third share of the team.

He explained how the job of F1 CEO is a highly appealing one.

Stefano is the better CEO

“The job appeals to everybody, but first of all, I think Stefano is the better CEO for such a company,” he explained.

“He has been the CEO of Lamborghini, has run Scuderia Ferrari and obviously his role at Audi, and he is fantastic for that role.

“I enjoy being a co-shareholder and co-owner of the team that is a franchise and diversifying in many other interesting areas. So I have no regrets at all.

“I think Greg Maffei absolutely took the right decision to go for Stefano and he is better for that job than me,” he concluded.