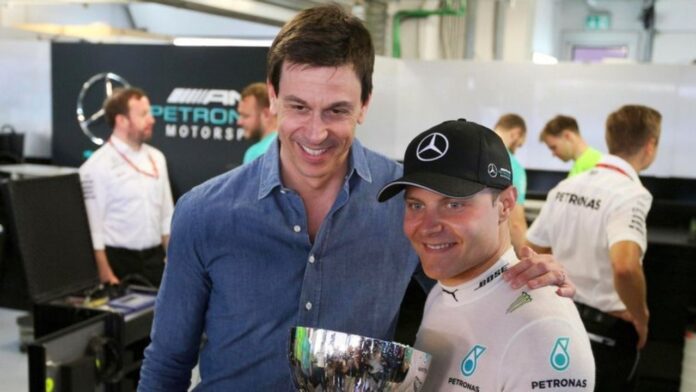 Valtteri Bottas has been always been a loyal and selfless driver for Mercedes giving his best possible result in every single race.

He often is under the situation where he has to swallow the hard pill to let his teammate Lewis Hamilton by in order to get a better result for the team.

With rumours surrounding George Russell being in line to replace the Finn, it is easy to come to the conclusion that the team does not value their supportive driver.

However, that is not the case.

Team boss, Toto Wolff has revealed that it is his ‘duty’ to help Valtteri find a seat when required, be it in Mercedes or any other outfit.

Wolff will do what it takes to support Bottas

During the British Grand Prix, Bottas was given a team order to let Hamilton overtake him so that the Brit could counter Charles Leclerc.

The gamble worked in favor of Mercedes as the seven-time world champion was able to overtake the Ferrari driver towards the end of the race and claim victory.

“If there is a situation where we want to give someone else a chance, it’s not just about my relationship with him,” Wolff said.

“I see it as my duty, because he deserves a great future.

“He has been a teammate of the best Formula 1 driver in history, and it is not always easy to shine in those circumstances. But he has been fantastic,” he added.

Who will replace Bottas?

While talking about the second Mercedes seat, there is only one name that comes to mind – George Russell.

The Brit is a part of the Mercedes junior driver program and has even had the opportunity to drive for the Silver Arrows at Sakhir last year.

Additionally, Russell’s contract with Williams is set to expire by the end of the current season which makes him the ideal candidate for the seat.

“We will use the coming races to get more clarity. I thought Valtteri’s last race (Austrian GP) was very strong, he needs to consolidate that,” Wolff said.

“We also know George’s strengths and weaknesses. I expect that we will make a decision during the summer.

“We will negotiate only with Valtteri and George. It’s between them,” he confirmed and concluded.

Who do you think will get the Mercedes seat next year? Let us know in the comments below!

Read More: Christian Horner proud of Verstappen – “He held on to it until the end”

Horner not bothered by Verstappen’s penalty – “It’s not a handicap...