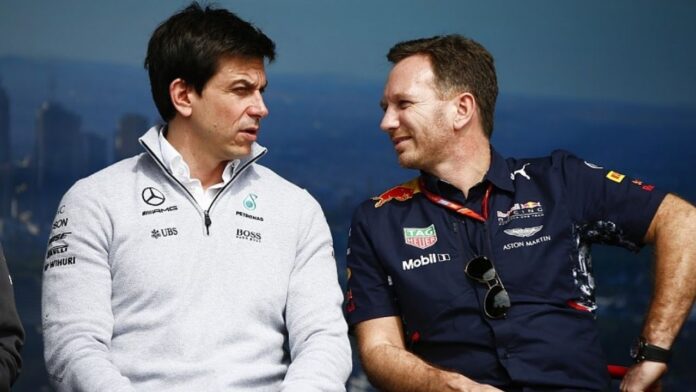 Mercedes and Red Bull are often on the verge of countering each other when it comes to their cars, rarely aiming for middle ground.

However, there are times when they call a truce on certain topics.

The future of Formula 1 engines is one factor that the two teams see eye-to-eye.

Red Bull team boss, Christian Horner and his Mercedes counterpart, Toto Wolff have similar opinions on the future engines which are set to come in 2025.

Wolff & Horner suggest extending the time of line by a year with it adding cost to the team’s budget. However, it will lead to a solution that all teams can work with.

What did the duo say?

Horner said, “more reasonable to plan the update [electric] motors without leaving anything to chance, making it postpone by a year.”

Wolff, just like his rival, seems to think the same.

“I hope that in the end we will be able to find a meeting point that everyone can agree on,” he said.

“I believe that we could easily advance the use of environmentally friendly fuels by one year and extend the current PU rules for another twelve months. That’s what all the teams would like.”

So far in the 2021 season, the Brackley-based squad have only three wins under their belt, all because of Lewis Hamilton.

The Milton-Keynes-based outfit, on the other hand, have won the other six leaving Mercedes far behind in the constructor’s standings.

Red Bull have 286 points to their name, but the seven-time constructor’s winners have 242.

Mercedes have not seen the chequered flag since the race at the Monaco Grand Prix. However, the team is optimistic about the upcoming race in Silverstone.

They are well aware of the power of Red Bull and are hoping to up their game during the tenth round of the 2021 season.

Red Bull, on the other hand, would like to maintain their comfortable leave over the Silver Arrows.