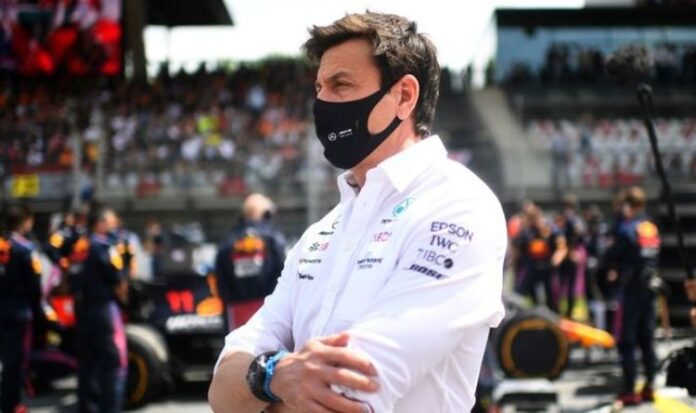 Things were going well for Mercedes on Friday with Lewis Hamilton claiming pole position for the newly-introduced sprint qualifying in F1.

Mercedes team boss, Toto Wolff expressed his distaste for the entire sprint qualifying format and demanded that the number of laps be reduced to make things more interesting.

During an interview after the race, Wolff was clear about his points about the entire format.

“Fan of the start, Instead of 17 laps, it would be good to only drive five or eight,” he said.

In addition to the number of laps, the Austrian also has issues with the significance of the result of the sprint.

“Regardless of the fact that Lewis was in [first place on the grid]. The pole position should be awarded in qualifying and not in the sprint race. I would have said that if it had turned out the other way around,” he explained.

According to the rules of the sprint qualifying, the top-three drivers were awarded points.

With Hamilton and Valtteri Bottas starting from P1 and P3, the outfit hoped to score the maximum points on Saturday.

However, the Dutchman stole the win and walked home with three points while Hamilton and Bottas had to settle with two and one respectively.

“We have lost one point. That’s annoying. But everything is still open for tomorrow. I think all the cars at the front have a pretty similar pace. That creates space for different strategies,” Wolff concluded.

The team boss has his hopes pinned on Hamilton and Bottas for bringing home the prize on Sunday as they begin their race from P2 and P3, respectively.

He hopes to avoid as many errors as possible so that the race plays out smoothly.

We are yet to see if Hamilton will bring home the podium on his home circuit.