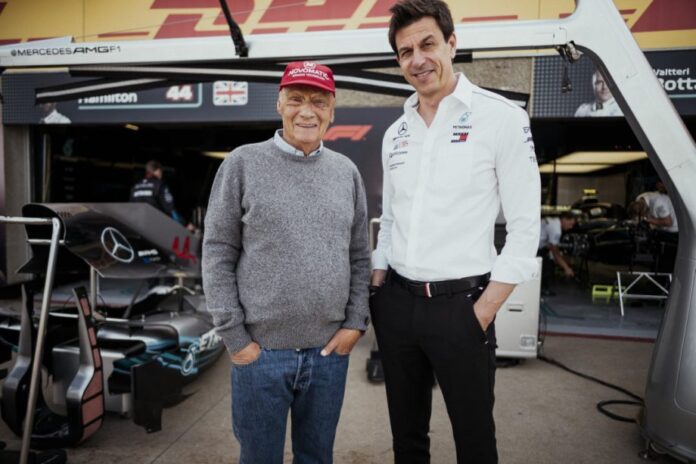 Since his joining back in 2013, Mercedes boss Toto Wolff has established himself among the most popular Team Principals on the grid.

By leading the outfit to seven consecutive world championships, fans give him credit for the success of the Silver Arrows during the turbo-hybrid era.

However, at every opportunity, Wolff does not fail to bring up one name – Niki Lauda.

While the three-time world champion passed away back in 2019, Wolff often speaks about how his influence on the team has helped them.

The current 2021 season has entered the summer break. As a result, there can be no communication about the technical aspects of the sport.

This led Wolff to look back on a story involving the two Austrians in Italy years ago.

Lauda held the reputation of being the most intelligent to enter the sport of F1. Apart from having great skill on the track, the world champion also knew how to set up a prize-winning car.

He joined Mercedes back in 2012 and helped the team reach new heights along with Wolff.

Lewis Hamilton gives credit to Lauda for him joining the team in 2013.

Wolff and Lauda have always been close aides and shared a healthy relationship. However, Lauda passed away a week before the Monaco Grand Prix back in 2019.

This left Wolff and his team shattered.

The 49-year old recalled the summer break in Italy when Wolff asked where Lauda was. Lauda responded by saying that he is at Wolff’s door and is calling him for breakfast.

Wolff ended up giving him a colorful response.

Wolff recalled Lauda saying: “I’m standing with the boat in front of your hotel. Are you coming down for breakfast at eight?”

To which Wolff replied: “So I said: ‘You can lick my a**. That you are stalking me now in Italy and forcing me to get up and have an espresso with you, we won’t do that.”

The current season is turning out to be the most challenging for Wolff and Mercedes amid strict competition from Red Bull and Max Verstappen.

While Mercedes is leading the constructors with 12 points, Red Bull have a visibly faster car.

With the races resuming in around two weeks, we can only wait and see if Christian Horner and Co. will bounce back and regain their lost lead.

Fernando Alonso net worth: How much does the Spanish F1 driver...