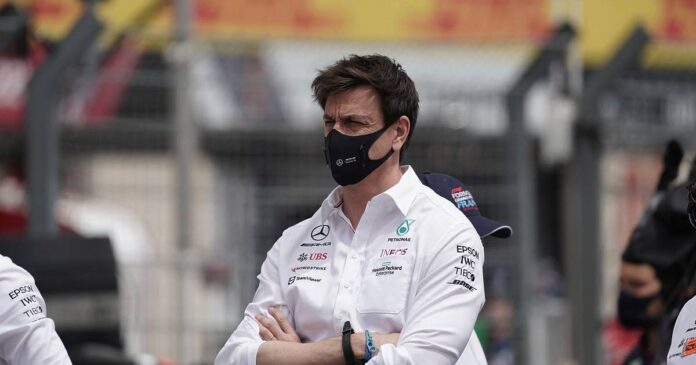 Lewis Hamilton‘s name was peaking in the headlines after the British Grand Prix in Silverstone, and not for the right reasons.

After Max Verstappen crashed out following a tag from Hamilton in the opening lap, an intense war of words emerged between the two teams.

Red Bull took the opportunity to knock Mercedes and Hamilton with heavy jabs.

While Hamilton is known to maintain his composure during such events, we can expect him to have been influenced by the entire situation.

The Raging Bulls were furious after not only losing out on points but also because they were left with added expenses to their bank.

Christian Horner went on to call Hamilton engaging in a “desperate move” against Max. The Brit was also labeled as a ‘dirty driver’.

However, Wolff reveals that Hamilton is doing good.

“I think he’s pretty relaxed about it, honestly. It is a very polarising story, and some of the comments that were made were very personal and probably inflamed the situation more. But overall, he’s good,” he said.

Horner blasts out at Hamilton

Red Bull boss, Christian Horner, was furious at Hamilton and claimed that a driver with so much experience would never pull a move like that.

“I think it was a desperate move,” Horner said.

“He failed to make the move in the first part of the lap, which he was obviously geared to do, and then it was just a desperate move sticking a wheel up the inside which you just don’t do.

The two teams will now face off at the Hungarian Grand Prix. We can only wait and see how the event turns out.

Lewis Hamilton and Max Verstappen banter is good for the entertainment...