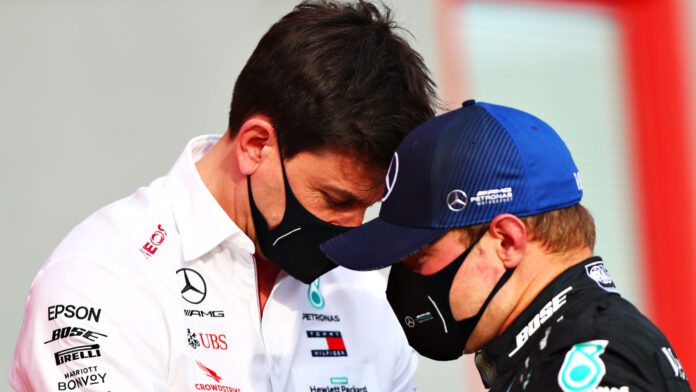 Bottas was running in P2 that race, and could have actually taken victory for the team. He then came in for a usual pit stop. However, he never came out, after it was revealed that a wheel nut remained stuck on his car’s front right wheel.

It was a bizarre and extremely harsh incident. After finding no solution for it, Mercedes were forced to retire Bottas from the race. After the race, Wolff had suggested that Bottas himself was at fault for the incident. He said he didn’t stop on the car mark in the pit box. As a result, the mechanic was forced to apply his wrench at an unnatural angle, causing the problem.

Recently, however, Wolff has been regretful of the incident. Speaking about the Finnish driver’s future, Wolff said that he has had absolutely terrible luck this season. He also said that Mercedes let him down in Monaco.

When asked by GP Fans if Bottas has had time to prove himself at Mercedes, Wolff said, “I think that’s too harsh.

“He has also had a lot of bad luck, when I think about Monaco where he should have finished second on the road, and we let him down. It’s very harsh. And if your team-mate is a seven-time world champion, a 100-grand prix winner, obviously, that will be difficult.

“He is a great team player, he has won multiple grand prix, has been on call all the time. 53 podium appearances, and that is a solid, very important pillar for us as a team that needs to be considered,” the Austrian concluded.

Bottas has been an integral part of the Mercedes juggernaut. Together with him, they romped its way to the Constructor’s championship the past few years. His contract expires at the end of this season, and he is heavily linked with an exit from Mercedes.

All said and done, Bottas has been solid at Mercedes. If he is on his way out, he would want to go out on a bang.