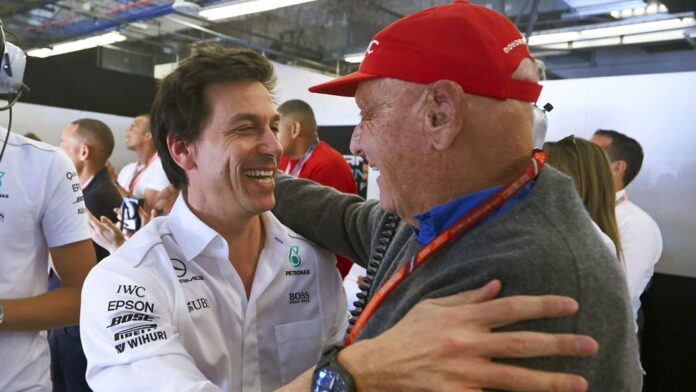 Niki Lauda was a prominent part of the Mercedes garage after having developed a good relationship with everyone in the team.

Team boss, Toto Wolff had a special friendship with the late Mercedes advisor.

In addition to his bond with the three-time world champion, Wolff is also close to Niki’s son, Mathias.

Wolff also revealed that Mathias was the first one to see the connection the team boss shared with Susie, his current wife.

He also talked about how Mathias was an integral part of his life.

In a recent interview, Wolff opened up about the bond he shares with Mathias Lauda, Niki’s son.

“We have known each other for a while, of course,” he said.

“I followed Matthias’ career live from the early days and then, of course, in the DTM. In the end, I think he was the first to notice that Susie and me are sympathetic,” he added.

Looking back at the incident, Matthias mentioned, “That was at the presentation in Düsseldorf. I noticed that straight away.”

Susie and Mathias were teammates in DTM for two years.

During the 2019 Monaco Grand Prix, Mercedes added a red star to their livery as a tribute to Niki Lauda.

The German team have kept the star so far and hope to continue it in the years to come in memory of the late advisor of Mercedes.

Wolff confirmed that the Lauda star will be a part of their livery as long as the car runs.

“Of course, there are marketing experts here who think it’s not corporate identity, a red star, it has to be silver,” he continued.

“The red star will always be on every Mercedes racing car in Formula 1,” said Wolff.

This means a lot to Niki’s son, who stated: “It’s a huge honor for us. It’s great that he is still on board.”

Read More: Lando Norris and Daniel Ricciardo far from being the dream team – “Our interests are different”